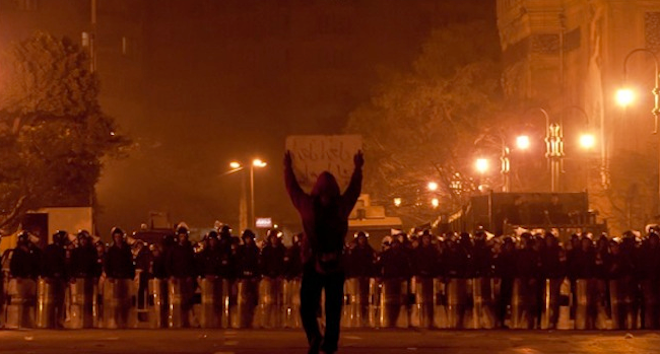 As we reported on yesterday, a number of volunteers have been working on translating the Arabic voice messages left by Egyptian protesters on Google’s Say Now service (which were then, with the help of Twitter, pushed out as tweets on the @Speak2Tweet account) into English.

As we followed the developing story yesterday – including capturing a five minute video the rapid fire Google Doc spreadsheet that was be used by the volunteers to collaborate – we wondered (and asked directly on the spreadsheet’s chat function) what would happen to the translations beyond the document. We were assured by a couple of the volunteers in that chat that a website was being worked on to display the English translations, and less than 24 hours later, the site is now live – Alive In Egypt.

Brian Conley – one of the volunteers – left a comment on our previous post (which we asked the volunteers to do when the site was live), and as we could see from the spreadsheet yesterday, the translated voice messages that were left mainly via hard lines, are now available to read on the site. It would appear that the site is using WordPress or a similar blogging platform and was put up by an organization called Small World News, which says on its website that, “is a documentary and new media company dedicated to providing tools to journalists and citizens around the world to tell stories about their lives,” and seems to be active in a number of conflict zones around the world.

Conley also mentioned in his comment that the public spreadsheet had been made private because of “too much access and it was crashing,” but that anyone that wishes to help with the translation can email [email protected].

Here’s an example of one the translated messages, simply entitled, “The demonstrators control not only the streets“:

The demonstrators control not only the streets, but all of downtown. More than 4 million protestors in downtown. (want to say anything guys?) hello? Yes, Millions of Millions of people are protesting in Tahrir Square in Cairo. Calling loudly for the toppling of the regime. We are in control of downtown, not only Tahrir. Millions of millions of people are gathering in downtown to protest against the regime. The message, they have cut out the calls, we can not even send out sms or anything. There are no tv, channels like Al Jazeera has been shut down. We are currently using landlines.

…and here is the link to the original voice message on Google’s Say Now. As each message is basically a blog post, each one can now be tweeted out or shared on Facebook. Really fast and innovative work by all parties involved.

Read next: Microsoft has registered 'KinectHalo.com' causing fanboys to weep with joy