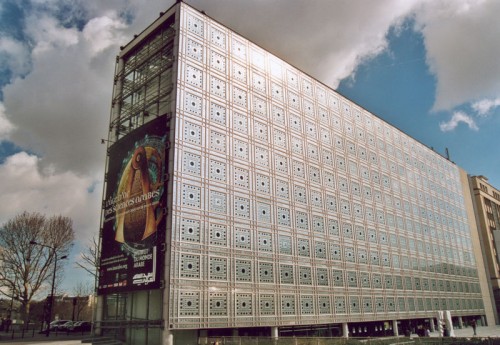 Built with technology that mimics human eye movement and Islamic Architecture utilizes 30,000 mechanical eyes to literally keep the building cool. I dare you not to read on.

Institut du Monde Arabe designed by Jean Nouvel which won him the 1981 Architectural design competition consists of state of the art high-tech walls built with mechanical apertures that respond to sunlight by narrowing to reduce solar exposure or dilating to allow daylight to enter the interior (like the human eye).

The design inspired by Islamic Architecture allows it to be both cultural and climate aware. Proving nearly 40 years later, that it’s both aesthetically and economically a site to marvel. The apertures also provide exotic and soft lighting on the side of the building located in the heart of Paris overlooking the Siene River. Don’t believe me take a look for yourselves.

I personally haven’t been to France but have heard of the Arab World Institute from the news, the building hosting the organization, which the main purpose of has been to disseminate information about the Arab world and set in motion detailed research to cover Arabic and the Arab world’s cultural and spiritual values since 1981 is one of the cultural reference points of Paris.