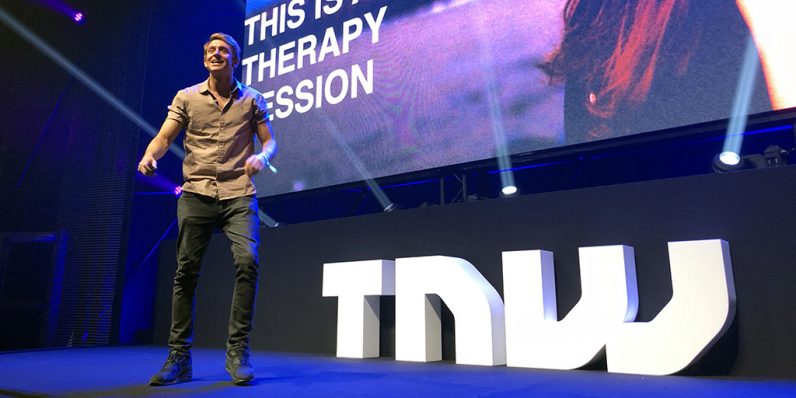 Judging by the lines to get in, not to mention those turned away at the door, people were excited to hear Mark Adams speak. Adams, the exuberant young VP and head of innovation at VICE, nearly missed the talk altogether. His plane was delayed, we’re told, and he sprinted, quite literally, from the airport.

Adams’ talk was a peek behind the curtain, however brief, on how the world’s biggest media company does business. Specifically, how it’s able to tell such captivating stories, and what lessons brands can glean from VICE’s editorial style.

Take Pepsi, for example, which never really stuck the landing when it came to borrowing the Black Lives Matter movement in creating a promotional campaign. The commercial, if you’ll recall, mostly failed to move the needle short of some initial social momentum on both sides: positive and negative.

The problem was in how Pepsi started the conversation. Pepsi, according to Adams, shouldn’t have been in the conversation in the first place. “It has to be strategic, otherwise it doesn’t matter — especially if you’re a brand.”

He then delivered what everyone came for: four key points to analyze when deciding whether it’s worth to enter the conversation, and how.

Take the demographic pulse of the people you’re attempting to reach. In doing so, avoid targeting a demographic that doesn’t exist, he says, like millennials.

Millennial is a useless buzzword that simply means people of a certain age that are media savvy, connected, and able to spot current trends. It’s a useless categorization. Millennials, you see, don’t often identify as millennials. It’s rare to hear, “Hi, I’m Mark, a 26-year-old millennial.” It never happens.

This also tends to make your target personas rather shallow. Agencies tend to file people into a box, whether they fit or not. Take this example: Jeff is 24 and enjoys creating memories.

For Pepsi, this was its cardinal sin. Instead of targeting an audience, it attempted to cast a wide net and attract an entire demographic that only really exists on paper: millennials.

Dove, on the other hand, nailed it. But more on that in a second.

Audience insight: What does that tribe actually care about?

People tend to go overboard here too by avoiding simple human truths in storytelling. Rocky, for example, isn’t just a movie that appeals to boxing fans. It’s crafted around the human element: the all-American hero who proves to be a broken, albeit fascinating, protagonist.

I’ve never watched a boxing match for more than a round or two, yet I appreciate the splendid storytelling in one of Hollywood’s most compelling franchises.

For brands, or anyone creating content, really, we often create supply where there is zero demand. This is something VICE is particularly good at avoiding, with verticals in everything from news to food, women’s issues, to art.

This brings us back to Dove. What made Dove’s ad campaign a knockout success — one that still garners millions of views per month over five years after the company last promoted it — is its ability to follow simple human truths in delivering a narrative that’s compelling to those who might otherwise prove disinterested.

The company took the Facebook tagging phenomenon — the one where we once had to ask to be untagged in photos we looked awful in, usually to find out our friends and families viewed us under a far softer lens — and applied it to beauty products. The rest is history. It’s still one of the most iconic ad campaigns of the past two decades, something still moving people years after it first launched.

This is about self-awareness, and as most already know, businesses tend to lack exactly this.

Take Pepsi, again. If we’re assuming the best, we’ll trust that Pepsi wanted to take a stand against injustice and for racial equality. On the other end of the coin, it was a cheap move to piggyback off a topical issue. The truth, as it often does, probably resides somewhere in the middle.

Where Pepsi failed here, according to Adams, was in not recognizing its own brand truth. Was it somehow connected to the protest? Of course not. Does it have deep-seated roots in the movement? Nope.

Adams says brands need to ask themselves a simple question, a sort of litmus test in determining the true impact of the content they’re setting out to produce. And that question is: “Is it authentic for our brand to do something about this?”

If not, stay out.

Deposit value: Give something of true value to the culture

“If you deposit something of true value to your audience,” Adams noted, “they will never stop thanking you for it.”

His example was Smirnoff.

VICE first spotted a troubling trend. Although electronic dance music festivals were predominately attended by women (61 percent), fewer than 17 percent of their headliners were women.

Smirnoff, a mainstay in the EDM scene, offered to tackle the problem the way we should tackle most problems: free booze. In exchange for free Smirnoff products one summer, promoters had to agree to book more female DJs. 50 percent, in fact. If a festival reached parity between male and female (or those identifying as female) DJs, they’d be rewarded with free booze for the event.

This both gave value to the festival promoters (and festival goers), and identified an opportunity to add value in a community Smirnoff was very much a part of.

It didn’t even have to market the move, as the gesture received worldwide press attention before any additional discussion from content marketers about branding, storytelling, or crafting custom content.

When you talk about your passions, and identify ways to create better content around the topics you’re most enthusiastic about, Adams says, that’s when you start creating conversations that are really hard to walk away from. “It’s like a game” he said, before correcting himself. “It’s like a war.”

Read next: US Department of Justice probes cryptocurrency manipulation