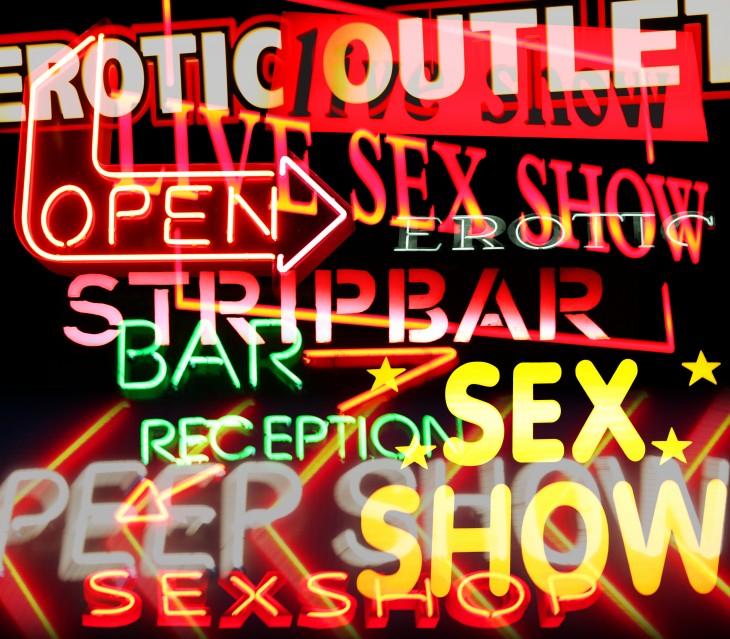 Adult entertainment websites are responsible for 4.41 percent of all desktop visits in the internet worldwide (in Feb 2015). To put that in perspective, ExtremeTech surveyed usage data pulled from Google’s DoubleClick Ad Planner, and discovered that the most popular adult entertainment site on the web serves up 4.4 billion page views per month — Reddit, by comparison, clocks in with just 2.8 billion.

The adult entertainment category ranks seventh on the list of leading categories, falling just below computers and electronics and surpassing a variety of other very strong categories, including games and sports.

Adult sites are clearly the vice (and pastime) of choice, as it beats out gambling; beauty and fitness, travel, health, and recreation. The adult entertainment industry is known for driving huge profits, and is in fact twice as large as the online finance industry, in terms of traffic share, as we can see in the chart below.

Adult sites are also the fourth largest category in terms of traffic from display ads, coming in right after shopping with a little over 3 percent of the market share of traffic. Gambling and gaming take the two top spots, and undoubtedly shopping ads are attracting visitors with ads. It’s no surprise considering the overwhelmingly visual aspects of this category.

According to SimilarWeb’s analysis, the top two countries with the highest share of adult websites are Iraq and Egypt, two socially conservative countries that many wouldn’t have previously thought would factor in the top 10. Rounding out the category are predominantly European nations with the likes of Japan and Peru making up the Asian and South American contingent.

Meanwhile on the list of countries with the longest average session time, East beats West. Middle-Eastern countries along with those in Asia dominate the top of the rankings. Interestingly, neither the the USA, UK or Canada are ranked on the below chart, suggesting that there is a very lucrative market for adult websites overseas.

Once again Europe is dominating the list – and in terms of highest pages viewed per visit, specifically northern Europe. However, way out in front is Hong Kong, with its nearest Asian neighbour, Singapore, placed in fifth.

Search Engines by Their Share of Traffic Supplied to Adult Site

Google is the clear search engine of choice for users looking for adult websites, with a whopping 83.48 percent of all adult-site search coming from the brand. Maybe this isn’t too surprising since Google is by far the biggest and most popular search engine, and with adult sites especially, people want a search engine they can trust. However, there have been suggestions that Google’s filtering results are sending more users to Bing.

In our analysis of the countries with the smallest shares of adult websites, the top five are, not surprisingly, dominated by predominantly Muslim countries, which is unsurprising given the overall highly negative stance on pornography.

Countries that are heavily influenced by religion comprise most of this list, though there are a few outliers – namely Australia, New Zealand and surprisingly Thailand with a significantly small share, too.

The countries with the highest bounce rate are also predominantly Muslim countries, suggesting perhaps that visitors came to the sites and quickly “bounced out” because of the risqué (and probably forbidden) material on display.

Countries with the shortest average session time is normally something we look at as a negative factor – i.e., users aren’t spending much time on site, so therefore it may not be interesting…but in the case of adult websites – well, we think that a short session time could indicate that the website is, ahem, successful in its aim – please don’t ask us to elaborate further. If this is true, then the majority of adult website visitors in Russia are super satisfied with the adult websites they’re visiting, where as those in Bulgaria and Romania are left needing more.

Fun fact: our data shows that the social media channel driving the most traffic to adult websites is not Facebook as we had expected, but reddit.com. You might be surprised to see that Tumblr is missing from this list, but that’s because the blogging site is built on subdomains, and therefore each subdomain is counted as a separate website. (Analysis can be done on Tumblr alone, but this would warrant its own study.

So what have we learned from SimilarWeb’s research? Adult websites are still going strong, with the majority of the sites originating in European countries while most of the traffic flow is coming from the United States.

The fact that the sex film industry is centered in Los Angeles could have something to do with this. However, it should be noted that one key factor for consideration with regards to the traffic flow is the fact that the US is such a large country.

Based on the sheer size of the US, the amount of traffic flow per capita is actually not as substantial when compared to much smaller countries also driving traffic to adult sites (like the UK, for example).

It’s also interesting to note that Middle Eastern countries have some of the longest sessions per user, but also the highest bounce rate. This suggests that visitors who stumble upon the sites accidentally quickly leave the site, while perhaps those that come to the sites deliberately are very interested at the content they’re finding.

The key takeaway here is that adult sites have to be highly adaptable. User preference, and the ever-changing and vastly varied laws regarding the production distribution of online pornography are just a few of the main factors influencing the adult industry. Regardless of these restrictions, adult websites are continuing to flourish across the globe.

Read Next: Pushing apps on television: The new way of old advertising