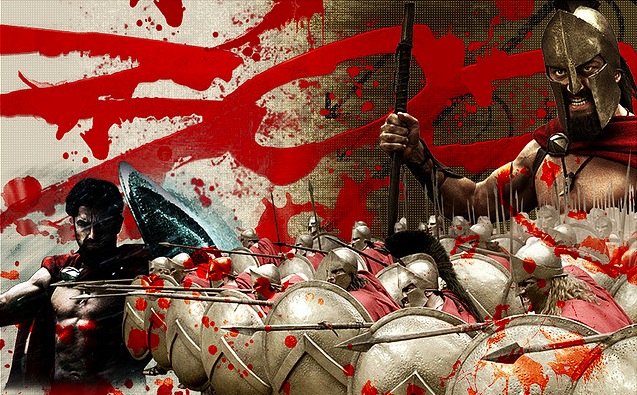 “Madness? No. THIS IS SPARTAAA!”

Few stories have captured the hearts and imaginations of nerds in the past few years like the epic graphic novel 300 and its faithful movie adaptation. I remember going to see 300 during its opening weekend: I walked out of that theater absolutely blown away. I honestly felt like I had just been injected with steroids and caffeine – I wanted to go sprint up mountains, wrestle bears, train with weapons, and get as strong as possible as quickly as possible.

300 is still the movie I turn to whenever I’m in need of some hardcore motivation to push myself while exercising.

In case you’ve never seen the movie or need a quick refresher, watch the trailer. It’s then time to start imagining yourself as one of the mighty 300, a Spartan soldier trying to fend off a overwhelming army in order to protect your people and your way of life.

Young or old, male or female, we can all be Spartans today.

The psyche of a Spartan

I’ve already covered the training regiment that the actors went through to get in shape for this movie (including the brutal 300 challenge). But I want to delve into the actual characters themselves and discover what makes them so badass and inspirational to the Nerd Fitness community.

I find many parallels between the mighty Spartan 300 and the (only slightly less) mighty Nerd Fitness Rebellion. We’re both small forces that would do anything for one another. We both fight an incredibly difficult and uphill battle against overwhelming odds (their battle with the Persians, our battle as a community against obesity, fear, heart disease, stereotypes, and life without passion). We both train with conviction, we both fight for our families and future generations, and we both don loin cloths before going to battle (hmm….).

Let’s see what else we can learn from King Leonidas and his mighty 300.

Fight whenever, wherever. Just fight

Spartans fight just as well in pouring rain as they do in the scorching heat. Snow? Sleet? Hail? Nothing like a little precipitation to make things interesting, right? During their first encounter with enemy forces:

Persian: A thousand nations of the Persian empire descend upon you. Our arrows will blot out the sun!

Stelios: Then we will fight in the shade.

Ha! Not only are these dudes strong as hell and fearless, but they’re also quite witty. Oh, and they will fight anybody, at any time, anywhere.

Spartan Up: When was the last workout you skipped for some bullsh** reason? Don’t feel bad, we all do it:

Stop making excuses. Stop putting off until tomorrow what you can do today. Make your personal health and wellbeing a top priority, and suddenly workouts stop getting skipped.

Make MacGyver proud, and learn how to exercise anywhere at any time. Back in May , I did 20 chin-ups in a row for the first time in my life. They were on a dead tree branch in Thailand. The month before that, I did some chin-ups on a kids’ swingset in an abandoned park at 11PM in Australia. And the month before that? The overhang of a roof at the New Zealand Airport.

Giving up isn’t an option

King Leonidas and the Spartans (epic band name, by the way) face an army that is greater than anything they have ever seen.

They know that this enemy will most likely end their lives and potentially wipe out Sparta unless they surrender and submit. However, these Spartans have been ‘Taught never to retreat, never to surrender. Taught that death on the battlefield in service to Sparta was the greatest glory he could achieve in his life.’

So, despite staring certain death and destruction in the face, these soldiers know only how to do one thing:

When Xerxes, the king of Persia, confronts Leonidas about his refusal to surrender, explaining that his victory will be so complete that ‘the world will never know [Sparta] existed at all!’ the Spartan king fires back:

“The world will know that free men stood against a tyrant, that few stood against many, and before this battle was over, even a god-king can bleed.”

If you’re overweight, out of shape, and chain-smoking 3 packs of cigarettes a day, the thought of losing 100 pounds and quitting smoking probably seems impossible to you. If you don’t like looking at yourself in the mirror, you probably could never see yourself going to a fun class at your gym because you’re afraid.

Spartan up: Recognize that fear is tyrannical, keeping you imprisoned and preventing you from living a life worth living. The odds may be stacked against you, the challenge may seem too dire, but you’re a Spartan, so you fight on. One meal at a time, one workout at a time, one day at a time.

Grab your sword, find some confidence, and fight back.

Train as if your life depended on it

Before fighting the Persians, the Spartan army is joined by another group of free Greeks who far outnumber Leonidas and his crew:

Daxos: I see I was wrong to expect Sparta’s commitment to at least match our own.

King Leonidas: Doesn’t it?  You there, what is your profession?

Free Greek-Potter: I am a potter… sir.

King Leonidas: And you, Arcadian, what is your profession?

King Leonidas: [turns back shouting] Spartans! What is your profession?

King Leonidas: [turning to Daxos] You see, old friend? I brought more soldiers than you did.

If you can “exercise” while watching TV, talking on your cell phone, and/or reading a book, you’re doing it wrong. You’re like the potter who calls himself a soldier. You need to think like a soldier, train like a soldier, and prepare like a soldier so that you can fight like one.

Spartan Up: It’s time to start looking at each of your training sessions like a battle. To borrow from how to become a superhero, take a few minutes to get yourself into the proper mindset before picking up a weight or doing your first pushup.

While exercising, block out every distraction around you – do what you were trained to do, bred to do, born to do: push harder, live better, train faster, be stronger.

It’s in your DNA.

Look out for your fellow soldier

These two passages sum it up perfectly:

Xerxes: It isn’t wise to stand against me, Leonidas. Imagine what horrible fate awaits my enemies when I would gladly kill any of my own men for victory.

King Leonidas: And I would die for any one of mine.

Stelios: It’s an honor to die at your side.

King Leonidas: It’s an honor to have lived at yours.

The Persians might have the numbers, but the Spartans train as if their lives depended on it and they’re all part of a brotherhood that cannot be broken. Spartans know that “in the end, a [man’s] true strength is the warrior next to him. So give respect and honor to him, and it will be returned to you.”

Spartan Up: If you have a training partner, or a group at work or friends that are exercising with you:

We are all capable of great things in this world; start pushing those around you to strive for those great things, and make sure they expect the same of you. You will all live better lives because of it.

I can honestly say that it has been an absolute pleasure to fight alongside my fellow rebels in the Rebellion – I try to honor you, my fellow rebel, by pushing myself to the limit with every workout.

I hope you do the same.

Leave it all on the battlefield

In one of the most iconic scenes in the movie, King Leonidas says goodbye to his wife out in the beautiful wheat fields before heading off to battle and certain death. The queen delivers one of the best lines in “goosebump-inducing awesomeness” history, a new category I just created about fourteen seconds ago:

Queen Gorgo: Come back with your shield, or on it.

No surrender. Only victory or death.

Reminds me of a quote from another movie I tend to draw a slight bit of inspiration from: “do or do not, there is no try.”

Spartan Up: I’m not telling you to go kill yourself trying to complete your workout today. I’m telling you that it’s your responsibility to give it your all whenever you exercise. Push yourself to find out what you’re capable of, which is always more than you think. Walk out of that gym drenched in sweat. Finish your sprints with wobbly legs.

Go hard or go home. And home isn’t an option.

I challenge you to channel your inner Sparta during your workout this afternoon. Think of your brothers/sisters in arms as you exercise; imagine them standing shoulder to shoulder with you, all pushing to become stronger warriors, faster soldiers, better heroes.

Respect and honor your friends by pushing yourself to greater heights – it’s these extra pushes and moments of determination when faced with adversity that level up your life.

Now, go. Fight. And come back with your shield, or on it.

Read next: Take One is a polished clapperboard iPad app for moviemakers