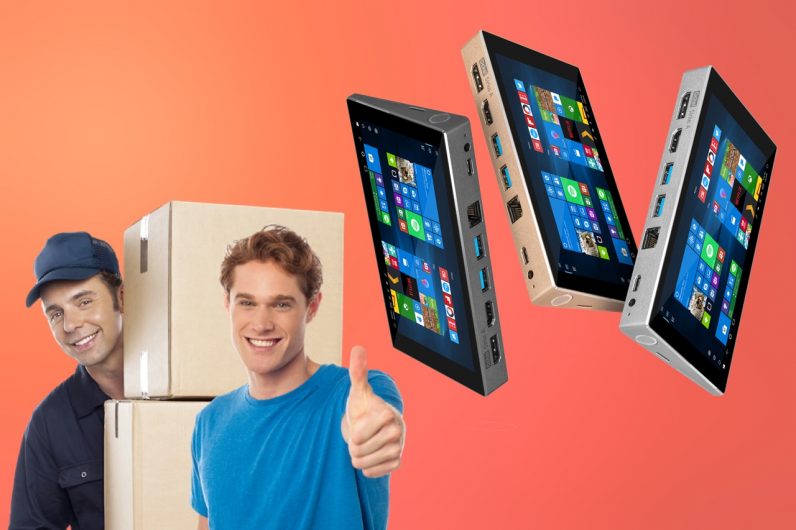 Yes, it took longer than expected. But as of last month, whoever pre-ordered a Sirius A (or A Pro) now gets to enjoy this mini PC, created by Dutch startup Ockel Computers. Both devices are now also available through Dutch electronics store BCC.

The big difference with the B products — besides better specs and the addition of a touchscreen — is that the Sirius A has many more ports, allowing users to connect it to pretty much anything. “Apparently, the Sirius A is the only mobile device in the world with a LAN-port,” explains founder and CEO Tim Haaksma. “We didn’t even realize that during the developing process.”

As mentioned, this process took a little longer than planned. As with the first two products, the Sirius A and Sirius A Pro were launched via an IndieGogo campaign and almost 3,000 people put in a pre-order.

“We planned to ship the devices in January,” says Haaksma, “but underestimated the process of selecting a manufacturing partner. Going to China, finding factories that are capable to build such a complex piece of hardware, drawing up the contracts — it all took longer than expected.

Haaksma admits that he was getting a little worried when the Sirius A got delayed. But thanks to the first two campaigns, which were both successfully funded and did ship devices in time, the Ockel community proved to be a loyal user base. “We did give them weekly updates — that helped. Still, I was pleasantly surprised to see users actively defending us whenever someone would complain on the website.”

Launching the Ockel devices through IndieGogo proved a golden move, but one that almost didn’t happen. Back in 2016, while working as CEO of Avanca International, a company that makes and sells mobile accessories, Haaksma got the idea for a mini computer. Together with his team, he developed a working prototype, which he showed to IndieGogo’s hardware director at the time, Evan Cohen.

“He immediately advised me to launch this on their website,” says Haaksma, who hesitated at first because the prototype was already financed and basically ready for production. But the entrepreneur figured IndieGogo would connect him with early adopters and increase his reach — and probably bring in some pre-orders too.

“The campaign took off immediately after it went live. I set the goal purposely low, to $10,000, in an attempt to trigger the algorithm so our campaign would be featured on the front page. A strategy that worked perfectly and resulted in being completely funded within 24 hours.”

In addition to getting a lot of press, the crowdfunding campaigns also connected Ockel to a loyal community of tech enthusiasts. Which, in turn, provided valuable feedback that pushed Haaksma and his team back to the drawing board after the launch of the Sirius B.

“Many users told us they loved the Sirius B, but that it had too little ports to connect it with other devices. Feedback we really took to heart in the developing process for the Sirius A.”

This kind of “customer-first” product philosophy might work if you are still relatively small —  Ockel currently has eight employees — but is it sustainable when the business grows?

Haaksma does realize that with exponential growth, some things will need to change — he still chats with some of the customers directly — but will always develop new products based on quantitative feedback. “The Sirius A Pro, which has 8GB RAM instead of 4GB RAM like the Sirius A, is a telling example. Our partners at Microsoft told us it would be too much. We also assumed it would be too much. But when we asked the community, about 80 percent ordered the Sirius Pro directly or changed their order.”

Although the Sirius A devices can be used for many different purposes, they still don’t allow for phone calls. Which is a shame, because such a mobile device — smartphone meets PC —  is somewhat of a holy grail in the mobile hardware industry. Haaksma would love to include this feature in future editions but is also is dependent on Windows.

“Windows 10 does not allow for phone calls, and getting to know their plans for the future proved difficult — and no, I can’t share them in this article, unfortunately — so that’s a big challenge for Ockel. As an independent company with no external stakeholders, deciding in which direction to innovate often calls for a bit of guessing.”

Still, Haaksma wouldn’t want to have it any other way. At least, not yet. “In the future, we might need external financing to keep growing. But for now, we still have the freedom to make our own decisions — which is something I deeply value.”

Stories of Scale is a content series with startup participants from our conference sponsored by EQT Ventures, sharing growth stories and lessons from industry insiders centered around four pillars: technology, business, human optimization, and communication.