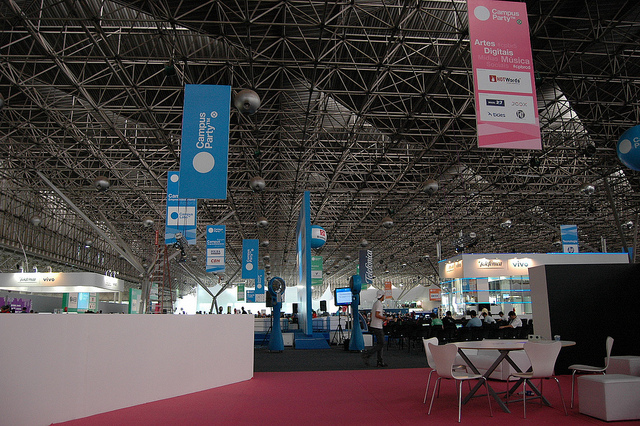 If you have attended Campus Party Brazil this week, you may have noticed a new name among the event sponsors: Crossfy. Its tagline? ‘Augmented Reality for Print.’

So what does Crossfy do and who’s behind this new product?

Crossfy, “the link between offline and online”

Crossfy may be debuting, but its creators aren’t. Well known in the Brazilian startup community, its CEO Amure Pinho is also the founder of Sync Mobile. Based in Rio de Janeiro, the startup initially focused on developing apps and other mobile solutions.

Yet, its scope is now much more ambitious, and includes creating interactive, AR-based experiences – for instance, it was responsible for what it describes as “the first newspaper in the world with an LCD screen,” in partnership with a Brazilian media group.

Developed by Sync’s in-house team, Crossfy is based on the same vision, but takes it one step up – hence Sync’s decision to launch it as a standalone product, with its own name and branding.

What Crossfy does is that it connects the offline and online world, via a mobile phone. Here’s its introduction video:

In the same way that Google Goggles lets you ‘search what you see’, Crossfy’s technology identifies printed ads and images to give access to associated digital content, from text and audio to video.

According to the startup, its approach is based on visual computing concepts that let it recognize patterns in any printed image. In other words, Crossfy could do away with the need for QR codes and markers, which means it is quicker and more convenient to use, both for the readers and for the publishers.

Publishers and newspapers are indeed Crossfy’s core target. As a matter of fact, Pinho says his new company already has deals in place with four clients, including two newspapers and one book.

Interestingly, Crossfy opted for a white label approach. Even after its full-scale launch, its technology will be integrated in third-party iOS and Android apps, while publishers will be charged an annual license fee to access the platform. Says Pinho:

“We don’t have plans for our own app because we believe that what makes Crossfy an interesting product for its end users is the editorial control of the content and its quality. It has to be relevant and direct enough for readers to use it intuitively. Crossfy will only be the technology behind our clients’ brands.”

It doesn’t mean Crossfy is thinking small – the company hopes to distribute its products across the world, and already closed deals with representatives in Argentina, Australia and Russia.

While Crossfy can be used to enhance print ads, this is only one scenario, Pinho points out. For readers to keep on using the system, publishers will have to promote engagement, and offer content that is fully relevant to their readers. “Nobody wants to test a technology and find out it’s only one more way to sell a specific product or service,” he says.

This explains why Crossfy isn’t closing partnerships with brands, like Google did as a test for Goggles. Talking to its CEO, it becomes quite obvious that Crossfy’s vision goes well beyond advertising – and it’s not just about picking up a niche. In the long run, its ambition is to disrupt content consumption, Amure Pinho explains:

“The integration between print and digital media will revolutionize the way we consume newspaper content. For instance, think of all the possibilities around the upcoming Olympic Games in London. For the first time, Brazil’s main TV channel [Rede Globo] won’t broadcast the largest sports event of the year. This gives us space to deliver a new experience on top of print media. Who knows, this could even help print media to be stronger than TV over that period.”

This isn’t blind optimism; while newspapers are suffering greatly in the US, their circulation in Brazil has actually increased. While Crossfy’s success will also depend on the accuracy of its image recognition, this different perspective is an interesting plus when it comes to inventing the future of content consumption.

What would it take to convince you to access additional content when reading a newspaper? Let us know in the comments.

Read next: This exhibit will be showcasing photos taken with cell phones, and yours could be included