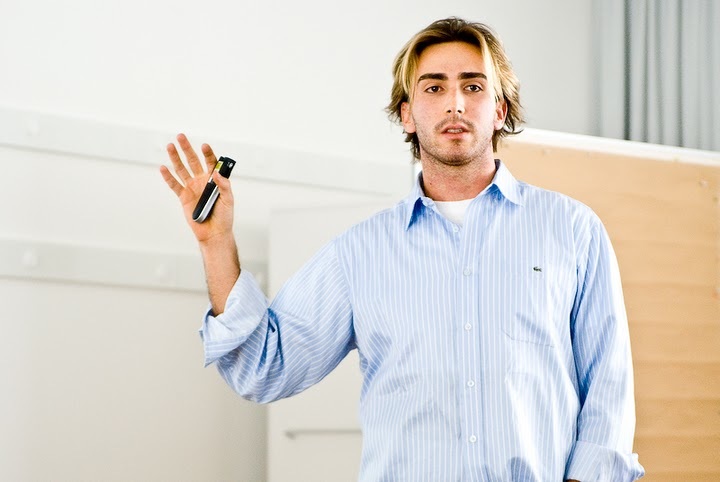 Are you a born entrepreneur? Marco Vanossi certainly is, and although he’s only 24, he has been for the last decade (see his video interview with Hermione Way).

So how did he grow from a resourceful kid living in a small town near Sao Paulo to spending half of his time in Silicon Valley and raising US$270,000 on his latest venture? Here’s Vanossi’s inspiring story.

Marco Vanossi had his first brush with entrepreneurship in his tender years, when living in a little touristic beach town, not too far from Sao Paulo. His family had a bakery where he spent a lot of time as a kid, and he recalls setting up his own mock-up stand in the store – from where he sold a number of overpriced products.

By the time he was 12, he received his first computer, a gift from his grandfather, and decided to use it to print labels for his family’s bakery. But he didn’t stop there:

“I thought of doing the same for other stores in our small town, so I took my backpack with me and visited them to distribute flyers and sell my printer’s services. To market my services even better, I decided to create a small newspaper – which, to be honest, had more ads and classifieds than content!

With the money he made from his small venture, Marco bought another computer – this time with access to the Internet. But it wasn’t just about surfing; Marco created RadarWeb, on of Brazil’s first search engines, which quickly generated 4 million views a month, he said. This obviously piqued the interest of larger players, and Marco was only 14 when he signed his first deals, with the e-commerce website MercadoLibre and with Yahoo! He has a funny anecdote about closing these agreements:

“Since I was only 14, my dad came along to the meeting, and Yahoo’s executives initially thought he was the “Marco Vanossi” they had scheduled a meeting with. Little did they know Marco was me, a teenager!

Clickpic: from image to sound

Marco then went on to study Computer Science at one of Campinas’ universities, Unicamp. Taking his initial interest in search one step further, he decided to focus more specifically on image search, a subject he’s been working on for the last four years with the help of a Brazilian business angel who invested R$500,000 (US$270,000) in his venture, known until recently as Pé2. 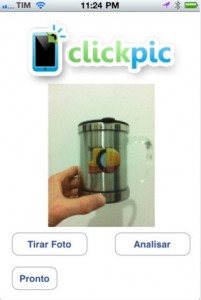 What Marco has been developing with this capital is an image recognition technology, which he released in the form of Clickpic. At the moment, Clickpic is an iOS app that lets users take pictures with their iPhone, which the app is able to recognize.

Although the technology itself is very impressive, it remains unclear how end users could make the most of it – although its B2B appeal is more obvious, especially for brands and ad agencies.

One thing is for sure: Clickpic could be used in a lot of different ways. While the technology itself reminds us of Google Goggles, Clickpic’s recently released API can also power apps like Faced.me, a face recognition tool on which Marco and his team worked during Sao Paulo’s latest Startup Weekend event.

And that’s not all: the patented technology behind Clickpic can also be used to recognize sound à la Shazam. Interestingly, it is still based on image recognition – the image here being the sound frequencies’ graph.

Marco is now hoping to license this technology to TV and radio stations, which could for instance use it within second-screen apps. But how will a young entrepreneur get access to TV decision makers? Well, he’s been quite successful in raising his own profile: he was recently a guest in one of Brazil’s popular late-night talk shows, Programa do Jô (here’s the video), so it may help him get access to large Brazilian media groups and sell his technology, which he demonstrated on screen.

Between Brazil and Silicon Valley

At the moment, Marco spends half of his time in Sao Paulo, where Clickpic has offices, and the other half in Silicon Valley, where his co-founder Gui Komel is based and working out of the Rocketspace‘s co-working space.

The pair’s ambition is for Clickpic to be fully headquartered in Silicon Valley in the near future, and Marco is currently applying for an E2 investor visa. However, Clickpic will still have offices in Brazil as well, he said.

No matter where he’s based, Marco Vanossi’s story can certainly serve as an example of Brazilian entrepreneurial talent in Silicon Valley, and hopefully inspire young wannabe entrepreneurs in Brazil and elsewhere.

Read next: Samsung adds new charges to case against Apple in Germany