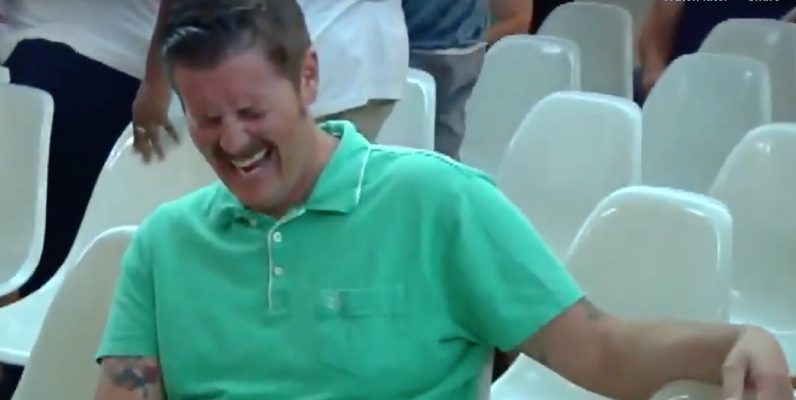 I tried to get ‘red pilled’ by r/The_Donald and I didn’t even get a T-shirt. What I did get though, was a deep enough understanding of the bigots, racists, ableists, homophobes, and other ‘forgotten’ people huddling in this safe space to develop some empathy for them.

I’ve come to care about the men – as far as I can tell, it’s just men – who make up the emotional support group that is r/The_Donald. The plight of the US president‘s most devoted followers is a sympathetic one (if you can academically ignore their hatred and bigotry) and, if I’m being honest, makes for some good guilty pleasure political pulp fiction.

I added the subreddit to my daily news consumption at the beginning of the month because I wanted to study these people in the wild. It’d been a while since they had a big kerfuffle in the community and things seemed “normal,” so I dove in.

One does not simply read r/The_Donald. You may as well join a group of teenagers AirDropping random, seemingly-meaningless images to strangers and expect to glean insight into their hopes and dreams. No, you have to consume r/The_Donald in order to even begin to understand what the hell they’re talking about. It takes a lot of effort to keep up with the evolving narrative.

The first problem you come across is that r/The_Donald is a community of people who, almost to the individual, feel full-on stifled. Most feel as though they’re flat out censored. They’re unable to say what’s on their mind without fear of reprisal from mods, Reddit’s overlords (either Jews or Russians, depending on which r/The_Donald user is complaining), or the public at large. This means they often speak in pseudo-code. I say pseudo, because it’s not nuanced. Secrecy isn’t the point, deniability is. It can take a while to catch the little hints that let you know when someone’s being disingenuous.

The subreddit was quarantined a few months back after dozens of users posted not-so-veiled threats and calls for violence against US law enforcement officers.

In the time since, they’ve adopted a stricter form of self governance, the result of which has created a Harry Potter-like “he who shall not be named” atmosphere. Users often say things like “we should be doing those things we’re not allowed to talk about here” or “they’ll find out what 2A is for” (the latter a reference to the Second Amendment right to bear arms).

What this boils down to is a culture where duplicitous speak such as sarcasm, mockery, and bad-faith arguments are woven into earnest dialogue seamlessly. Jokes are sprinkled throughout most conversations, no matter how serious the topic is. Users will often carry conversations off the rails and almost any topic can divulge into a rant against women or liberals. The only thing that’s off the table are criticisms of Trump.

Members who post Trump-positive memes, words of encouragement, or denigration against anyone who isn’t #MAGA, are met with an outpouring of support and friendship. Anyone who breaks ranks, speaks with any negativity against Trump or his true supporters, or tries to defend the libs and their “Deep State” allies is met with a chorus of disapproval and rejection.

Above all, it seems the community must remain a pure, unfettered safe place for those whose faith lies in the President. He is the one who can get “it” done and it is their solemn duty to support him no matter what. It’s dangerous to think they’re stupid, ignorant, or insincere because they are definitely all in for President Trump. But they aren’t a cult.

As far as I can tell, it’s just a support group for people who believe they should be celebrated for supporting their president. They think they should be cheered as free-speech advocates for refusing to cull words like “faggot” and “retard” from their language in what they see as pandering to PC culture. They see themselves as patriots and leaders in the fight against the “Deep State,” and it continuously blows their friggin’ minds that the rest of the world doesn’t understand what’s so obvious to them.

They’ve even subscribe wholeheartedly to the fantasy that they’ve been “red-pilled” and thus have somehow magically gained the ability to convert folk wisdom and news articles into doctoral-quality thesis’ on sociopolitical discourse. It’s cute. I can’t help but like their “Dunning-Kruger” world and the simplicity it represents.

Sure, the members of r/The_Donald call women “bitches,” and “cunts” with childish regularity. And you don’t have to look very hard to find anti-semitism, homophobia, sex-negativity, ableism, racism, religious intolerance, or the permeating theme that anyone who disagrees with them is subhuman trash that deserves to be the victim of violence.

But they believe in themselves to an almost insane degree. They actually think the world hates them because they love Donald Trump. They cannot fathom, none of them, that their bigotry and hate speech is what causes the general revulsion towards them: they cannot see their own bigotry and thus they think it is not there. It is this level of cognitive dissonance that allows the members of r/The_Donald to not just genuinely believe they’re being persecuted, but to actually think it’s because the world hates them for their heroic patriotism.

And it’s this level of total self-blindness that makes it a fantasy trip to read their spin on the events of the past month – especially as the Ukraine scandal and calls for the president‘s impeachment have dominated the news cycle recently.

No, I definitely wasn’t red-pilled. But I’ll probably keep reading anyway, I enjoy the escape from reality.

Read next: The fastest way to update (and delete) apps on iOS 13