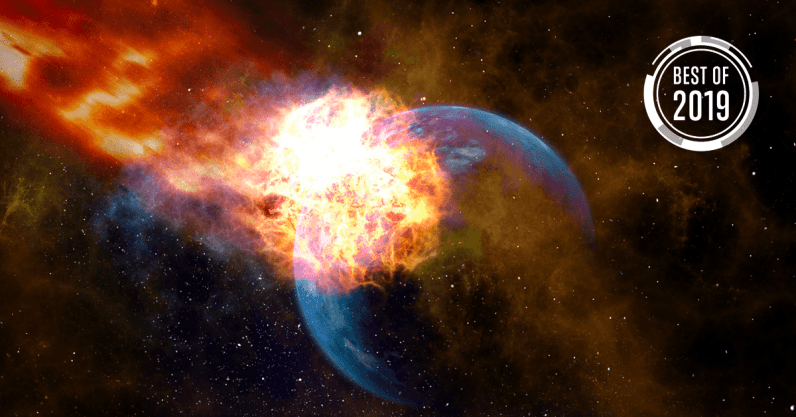 NASA administrator Jim Bridenstine thinks it’s time to start taking the threat of an Earth-altering asteroid impact seriously. In a speech today at the International Academy of Astronautics Planetary Defense Conference, Bridenstine opened his keynote with a warning about what’s to come.

“We have to make sure that people understand that this is not about Hollywood, it’s not about movies,” he said. “This is about ultimately protecting the only planet we know, right now, to host life and that is the planet Earth.”

Bridenstine acknowledged that a large asteroid colliding with Earth is met with a sort of “giggle factor,” a false sense of security brought on by countless Hollywood films that have perhaps desensitized us to the carnage it would cause. But you don’t have to look far to see the kind of damage an asteroid collision creates.

In 2013, a 20 meter (65 foot) meteor exploded over the city of Chelyabinsk. Traveling more than 18 kilometers per second (11 miles per second), the meteor exploded some 23 kilometers (14 miles) above the Earth’s surface, according to NASA. But it still wreaked major havoc. The meteor reportedly damaged thousands of buildings and sent more than 1,500 people to the hospital — most from the debris caused by the shockwave.

“These events are not rare; they happen,” Bridenstine noted. And according to one model, we should expect a similar collision once every 60 years.

The 20th century featured three such impacts: one in Tunguska, Russia, in 1908, and another in Brazil in 1930. The Tunguska event leveled more than 2,000 square kilometers, but caused no human casualties.

But NASA is working on a fix. Currently, the agency has an ambitious goal of tracking 90 percent of asteroids 140 meters and larger — an asteroid large enough to wipe out a small country. And while meteors lose a significant portion of their mass upon entering our atmosphere, it’s worth noting that the rock responsible for the Russian event in 2013 was merely 20 meters, or one-seventh the size of those NASA is tracking.

Perhaps Elon Musk, and SpaceX can help. NASA recently announced it had contracted SpaceX, paying the company $69 million to help solve the problem. In its first joint mission, the Double Asteroid Redirection Test (DART), SpaceX will send a rocket on a collision course with a near-Earth object, an asteroid in this case.

If successful, the rocket will steer the object away from Earth.

It’s also worth noting that NASA doesn’t seem to know what to make of this. It’s been incredibly inconsistent in its predictions, with its Jet Propulsion Laboratory seemingly taking a contrarian view to Bridenstine’s:

NASA knows of no asteroid or comet currently on a collision course with Earth, so the probability of a major collision is quite small. In fact, as best as we can tell, no large object is likely to strike the Earth any time in the next several hundred years.

A bulk of these stories are generally minor warnings that sound alarm bells for members of the press who don’t understand them in the same way astronomers do. The asteroid 1999 RQ36, for example, made headlines after models showed it could hit our planet by 2182. NASA, however, says it’s still too early to make these kinds of predictions about an asteroid’s orbital path.

So, maybe we hold off on that Armageddon sequel, just for now?

But, if you’re really worried about a cataclysmic event, you can check out NASA’s “Sentry: Earth Impact Monitoring” webpage to see which known asteroids have the highest probability of colliding with Earth.

Or if you’re really wanting to go down the rabbit hole, here’s a training exercise that gives you a peek behind the curtain in how NASA would observe and respond to an imminent collision, based on hypothetical simulations. How’s that for specific?

If you’re interested in learning more about how technology is solving some of mankind’s biggest problems, check out the Future Generations track at TNW Conference.