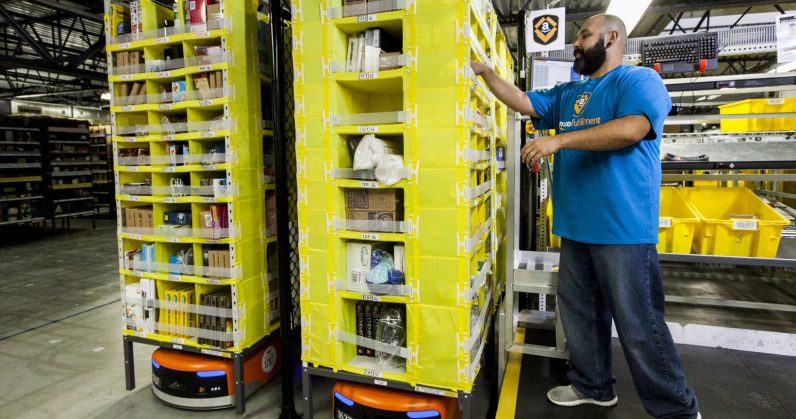 There is no stopping Amazon from taking over the world. The retail behemoth had a blockbuster first quarter in 2019 with revenues of $59.7 billion and $3.6 billion in net income, an all-time record and more than twice what it was making a year ago.

In addition, the third most valuable tech giant said that it plans to invest $800 million to make one-day shipping the default option for Prime members, thereby cutting down priority shipping times in half.

Amazon hasn’t detailed whether the improved shipping times are a result of optimized processes, or of increased workloads for warehouse staff. But numerous reports, including one as recent as yesterday, indicate that working conditions for warehouse employees are still far from ideal.

On one hand, Amazon’s plans to accelerate Prime delivery speeds will doubtless satisfy its 101 million+ US subscribers, turning Amazon into the most frictionless shopping destination on the web.

But CEO Jeff Bezos‘ rapid ascent as the wealthiest man in the world has come at the cost of its employees working under endlessly brutal and punishing conditions.

A report by The Guardian earlier this month revealed numerous instances of employees at its order fulfilment centers where “Amazon workers are left to suffer after sustaining workplace injuries, leaving them unable to work, deprived of income, and forced to fight for months to receive benefits and medical care.”

Last November, the company’s poor record with regards to worker treatment led to a New York City labor union taking a hard stance against the gruelling conditions for warehouse workers. “Amazon has a record of routinely mistreating and exploiting its workers at all levels, whether they are employed in its corporate offices or in its warehouses,” said Stuart Appelbaum, President of The Retail, Wholesale and Department Store Union (RWDSU).

Subsequently, a series of stories by an anonymous employee published in The Guardian threw more light on what it’s like working at one of Amazon‘s fulfilment centers.

“They treat us like disposable parts,” wrote the insider. He explained:

We work hard, and diligently, to make Amazon run. While our collective efforts produce astounding results, we are supervised ever more intensively. Through the use of digital trackers and indicators, our workday is managed down to the second, with each task timed based on a ‘rate’ set by managers who push us ever faster. Work is often organized to keep workers from talking or even taking breaks, with this time considered ‘off-task’. Like factory workers on the assembly line, we are essentially extensions of the machine.

In fact, a new report published by The Verge yesterday shows how it employs an automated tracking and termination process to fire workers. “Amazon‘s system tracks the rates of each individual associate’s productivity,” said the report, adding it “automatically generates any warnings or terminations regarding quality or productivity without input from supervisors.”

Amazon, for its part, has consistently resisted unionizing efforts, with Vice President Brian Huseman going to the extent of voicing the opinion that an open door policy was the most effective way to respond to the concerns of the workforce. It has touted that it offers employees “a climate controlled, safe workplace” and last year raised its minimum wage to $15.

But the unrelenting pace of work has led to mounting frustration among employees. “We are not robots. We are human beings. We cannot come into work after only four hours of sleep and be expected to be fully energized and ready to work. That’s impossible,” said Rashad Long, one of the warehouse workers who pushed for a union earlier this year.

RWDSU’s Appelbaum has issued a statement in response to Amazon’s announcement:

With two-day Prime shipping, Amazon fulfillment workers currently face speeds of 200-300 orders per hour in 12-hour shifts. They struggle already to maintain that pace. If Amazon plans to effectively double the speed, it must also address existing workforce needs and ensure its workers are safe. Increasing fulfillment speeds means they need to hire more workers, under more sustainable speeds that don’t put worker’s lives in jeopardy.

Mr. Appelbaum continues to spout falsehoods and display his overall lack of knowledge as to how Amazon operates. We appreciate his concern for our associates but his concern is misguided and self-serving. Employees are the heart and soul of our operations, and we’re proud of our team around the US who are paid at least $15 an hour with great benefits from day one.

We’ve been building our network for over 20 years allowing us to create a world-class customer experience powered by incredible employees who work in a positive, safe environment in our facilities. We have strategically grown our network to include fulfillment centers, package sortation centers, delivery stations and air hubs all to be closer to our customers. This enables Amazon to deliver orders faster and more efficiently – not by working harder but by working smarter based on decades of process improvement and innovation. But don’t take my word for it, come see for yourself what it’s like to work in operations at Amazon through our public tours.

Like it or not, Amazon is here to stay. We love the speed and efficiency of deliveries we enjoy as Prime subscribers. But knowing that they are fulfilled by human workers employed in sweatshop-like conditions is a hard pill to swallow.

It is absolutely not true that employees are terminated through an automatic system. We would never dismiss an employee without first ensuring that they had received our fullest support, including dedicated coaching to help them improve and additional training. Since we’re a company that continues to grow, it’s our business objective to ensure long-term career development opportunities for our employees. Similar to many companies, we have performance expectations regardless of whether they are corporate or fulfillment center employees. We support people who do not perform to the levels expected of them with dedicated coaching to help them improve and be successful in their career at Amazon.

The story has been updated to include comments from the RWDSU and Amazon.