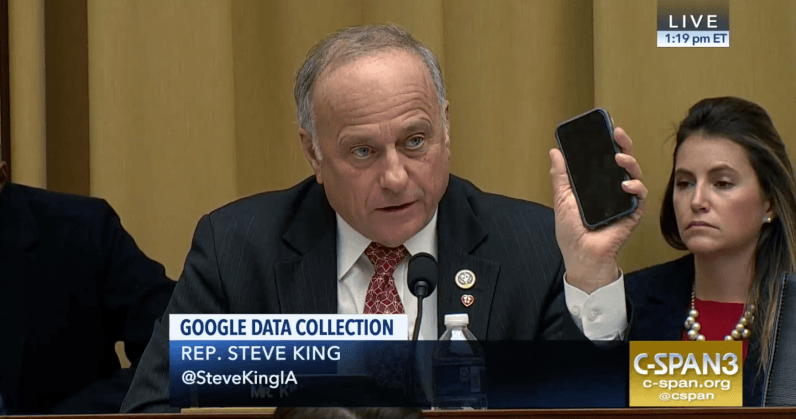 Google‘s chief executive Sundar Pichai today appeared on Capitol Hill to answer questions about a number of issues. Most pressing were issues with the collection of data, plans for a heavily censored Chinese search engine, and how to best combat misinformation, including what role, if any, Google should play in stopping it.

In keeping up with tradition, today’s testimony wasn’t without a bit of meme fodder. It didn’t quite reach the level of Facebook CEO Mark Zuckerberg explaining how free services made money on the internet to Sen. Orrin Hatch, or pointing out that WhatsApp isn’t an email platform to Sen. Brian Schatz, but it did have a few, choice “old people internetting” moments. And it’s these moments we relish, the times when simple questions can convince us, unequivocally, that our elected officials understand the tech-centric world we live in.

First came this exchange, with Rep. Steve King, on why he sees unwelcome news on his iPhone.

*I have a 7-year-old granddaughter who picked up her phone during the election, and she’s playing a little game, the kind of game a kid would play. And up on there pops a picture of her grandfather. And I’m not going to say into the record what kind of language was used around that picture of her grandfather, but I’d ask you: how does that show up on a 7-year-old’s iPhone, who’s playing a kid’s game?

Pichai appeared to chuckle slightly, before composing himself and calmly informing the congressman that Google does not make the iPhone. You can catch the head-scratching moment here.

It’s unclear from the exchange, but the unwanted content King speaks of could be numerous news pieces that outlined his past racist tirades and affiliation with white nationalist groups.

So I’m going to search for ‘Congressman Steve King.’ I’m going to hit the ‘News’ tab. First article that pops up is from ABC News. It says ‘Steve King’s racist immigration talk prompts calls for congressional censure. That’s a negative article. But you don’t have a group at Google sitting there thinking and trying to modify search results every time Steve King comes up. That’s not what’s happening, right?

Pichai confirmed that it wasn’t, stating that Google does not manipulate search results.

And to some of my colleagues across the aisle, if you’re getting bad press articles and bad search results, don’t blame Google, or Facebook, or Twitter — consider blaming yourself.

Here’s the video, for anyone interested in watching King’s public flogging at the hands of Rep. Lieu.

Lieu, better than many of his colleagues, seems to understand the problem. Conservatives have, for years now, cried foul, believing that tech giants like Google, Facebook, and Twitter were silencing conservative voices and surfacing only negative content. I discuss Google’s actual biases here, if you’re interested.

But while Lieu seems to get it, a shocking number of politicians really don’t. And that’s cause for concern to anyone paying attention as these hearings unfold.

Read next: Facebook HQ buildings evacuated due to a bomb scare (Updated)