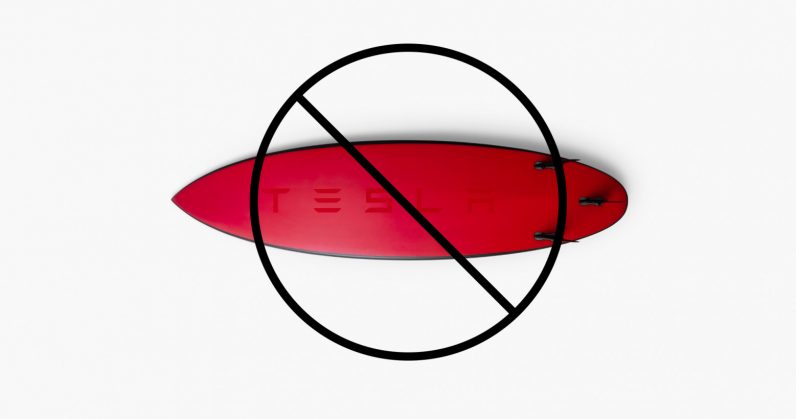 Elon Musk is at it again. For a very limited time today Tesla listed a “Limited Edition Tesla Surfboard” at its online shop. It would have set you back a cool $1,500 if you were able to snag one before the limited run of 200 sold out. Now they’re going for up to $5,000 on eBay.

But I won’t be covering it.

The board is a collaboration with two expert board makers, Lost Surfboards and Matt “Mayhem” Biolos, so the quality, presumably, is quite high. That said, Lost’s boards typically sell for around $750, so adding a Tesla logo seems to be the kind of performance boost that warrants the 100 percent price increase.

I don’t care, though. I’m definitely not covering the news of the board’s sale, launch, and subsequent secondary market. Nope. The people who were “lucky” enough to snag one of these limited edition items can look elsewhere to find out it’ll take two to 10 weeks before they can expect to hang ten. And that’s only if Musk isn’t relying on insanely complicated robots to assemble them.

If he builds robots, I’ll cover that. But I’m definitely not devoting any of my attention to a dumb surfboard. And I seriously don’t care that they are designed to fit inside any Model S, X, or 3 Tesla vehicle.

It’s not worth the effort.

Musk, no matter how hard he tries, can’t get me to pen a single word. It’s a marketing gimmick, and I’m definitely not falling for it like I did the “Not A Flamethrower” — a promotion for his underground tunneling company, The Boring Company.

You think you can trick me into covering a surfboard? Fat chance.