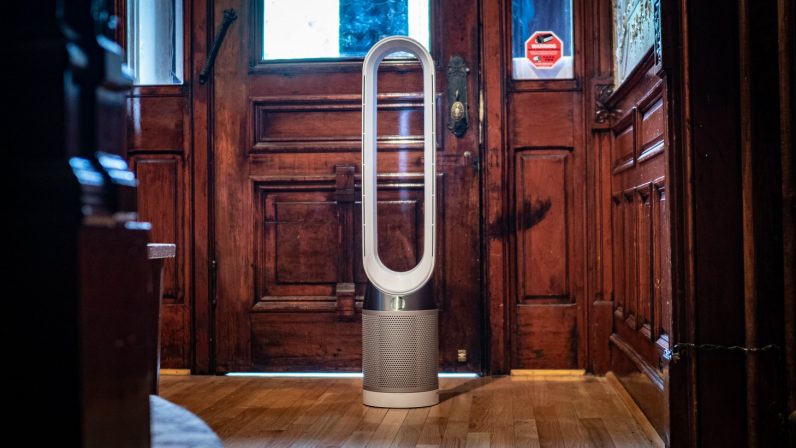 Most people who acquire an air purifier do so because they have allergies – often to their pets. My case was the opposite: Connie, my dog, is allergic to humans.

So when Dyson offered me the chance to review its new Pure Cool – a combination fan and air purifier – I had one question: Would it help Connie feel better?

The answer is… maybe!

And at the very least, it’s a really cool fan – pun very much intended.

Here are the basics: The Pure Cool comes in both tower and desktop sizes. It works as a futuristic-looking fan – the bladeless “where is the air coming from?” design is as cool as ever – while also cleaning up their air around you using charcoal and HEPA filter layers to remove particulates. Dyson rates it as being able to remove 99.97 percent of allergens and pollutants as small as 0.3 microns.

It’s very expensive, at $549 for the tower, and $449 for the desktop size. But that should come as no surprise by now, given Dyson’s pedigree. It’s not for people looking for the best bang for the buck, but it’s definitely worth your attention if budget is not a limiting consideration.

The Pure Cool has been around for a while now, but this year there are a couple of significant improvements. Most notable is a little LCD on the base of the device. This provides surprisingly detailed information on the air around you, including contaminants such as pollen, dust, smoke, dangerous fumes. If connected to Wi-Fi – because even fans come with Wi-Fi now – you can also get local weather information like temperature, humidity, and expected allergen levels.

You can also monitor all these things with the Dyson Link app, which doubles as a remote control. Which is good, because if you lose the included remote – which attaches magnetically to the top of the fan – you can only turn the fan on and off via the single power button. There are a couple of times I’ve lost that remote, and the lack of physical controls on the fan itself is very annoying.

I was surprised by how often I used the app though – it’s great for when you’re too lazy to get out of bed, and you can set up control via Amazon Alexa. I now use the app more often than the remote, even if the fan occasionally disconnects from my Wi-Fi.

Frankly, before the Pure Cool, I never particularly thought about my air quality – I don’t have any allergies, after all. But now it’s something I’m constantly conscious of, and I think for the better.

Every time I overcook my food, the fan’s tiny air quality graph immediately moves into the red zone. You bet that means I’m going to open a window. Once, the graph alerted me to the fact I’d left my stove leaking gas. Woops.

And even when I don’t need to open a window, I notice the air clears up after cooking more quickly than it used to. The Pure Cool is able to automatically sense deteriorating air quality and adjust its performance accordingly. That’s pretty neat.

Then there’s my dog. Last time we checked, she seemed to be allergic to approximately half of all organic matter, including human dander. She takes monthly shots for it, but sometimes they’re not enough.

Now, I wasn’t going to use my dog as lab animal. I didn’t purposefully turn the Pure Cool on and off just to see how she would react. But I’ve had the fan at home for a couple of months now, and I work from home, so I have a fair bit of anecdotal evidence.

So very unscientifically, I’ve noticed that she scratches less when the fan is on, and her overall mood seems to be better. I leave it on most of the time, but if it was off overnight, she seems to scratch more the next morning. The Pure Cool obviously doesn’t cure her allergies, but it definitely seems to help, and that’s good enough for me.

The Pure Cool is also the best fan I’ve ever used. Granted, I’ve never spent $500 on a fan before, but it’s clearly a cut above your average tower.

For one, it’s rather quiet except the highest settings, which I rarely need, and the fan comes with 10 speed settings for precisely dialing in the airflow. Though I’ve seen better raw power from bigger (and louder fans), it’s the directivity that’s impressive. The Pure Cool sends a focused stream of air several feet away, and seems to circulate air throughout my entire studio better than my ceiling fan does.

I also appreciate how it’s unique design makes it look less obnoxious in my small living space. Cleaning the Pure Cool is also much easier than trying to dig through the gunky grill of your typical tower fan.

On chillier days, I appreciate that the Dyson has a reverse airflow mode that diffuses the air behind the fan rather than sending a directed stream. That lets you to keep using the air purifier function without needing to reach for a blanket.

When I began my Dyson V10 review, I thought I’d struggle to justify reviewing a $500+ vacuum cleaner. The same happened with the Pure Cool. At $549 for the tower and $449 for the desktop unit, I can’t possibly recommend them purely on value. You can buy a good separate air purifier and fan for far less.

But as with the V10, the Pure Cool feels like you get what you pay for. It’s not a value product, but for those who have the financial means, the Pure Cool is a meticulously engineered product that looks good and works great at both its proposed tasks.

Read next: Here are the most 'Murican games to play on July 4th