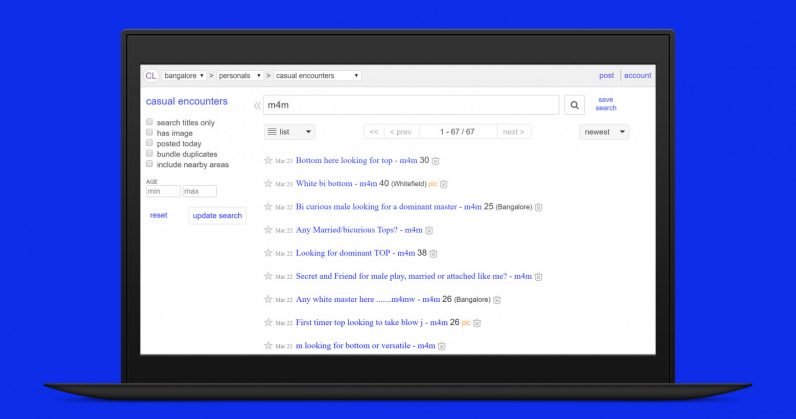 Craigslist, the global classified ad site, is shuttering its Personal section for its US listings. The decision was taken in response to Congress passing the FOSTA bill from 2017 that makes sites liable for facilitating sex trafficking.

The site has previously come under fire – as far back as 2010 – for allowing users to post ads offering prostitution services involving adults as well as children. And last year, when a Senate bill called the Stop Enabling Sex Trafficking Act was approved by the Commerce, Science and Transportation Committee, the company hired five lobbyists – its first such hires – to influence the Congress’ consideration of such bills and keep Craigslist out of trouble.

The new bill, called the Allow States and Victims to Fight Online Sex Trafficking Act of 2017 (FOSTA), could land Craiglist in hot water if it continues to allow people to post ads promoting the availability of minors for sex.

In a statement on its site, Craiglist said:

Any tool or service can be misused. We can’t take such risk without jeopardizing all our other services, so we are regretfully taking craigslist personals offline. Hopefully we can bring them back some day.

To the millions of spouses, partners, and couples who met through craigslist, we wish you every happiness!

It’s worth noting that while Craiglist attempted to tackle the issue of ads offering prostitutes back in 2010, many of them were still being published in the ‘Casual encounters’ section. Plus, the Personals section has only been shut down for US cities, and not for pages for cities in other countries. For a company that’s estimated to be worth roughly $1.3 billion, with $690 million in revenue from directly selling ads in 2016, the change will hurt its bottom line, but also make it more difficult for traffickers to find clients.

Hopefully, FOSTA will encourage more sites to enforce stricter rules about what users can advertise, and potentially stymie the child sex trafficking business in the US. Craigslist isn’t the only place where such activity takes place: there’s also Backpage and Eros among others, and it’s possible that they may follow suit.

Interestingly, Hollywood actor Ashton Kutcher has been involved in battling child sex trafficking by associating with a nonprofit called Thorn, which uses tech to address the problem. The organization announced in October 2016 that its Spotlight tool, which scans online classifieds to help spot trafficking activity faster than human review, had helped identify more than 6,300 victims of sex trafficking in the US, of which nearly 2,000 were children. The tool is now used in all 50 US states by 780 agencies.

Read next: 11 security strategies to protect your company from phishing attacks