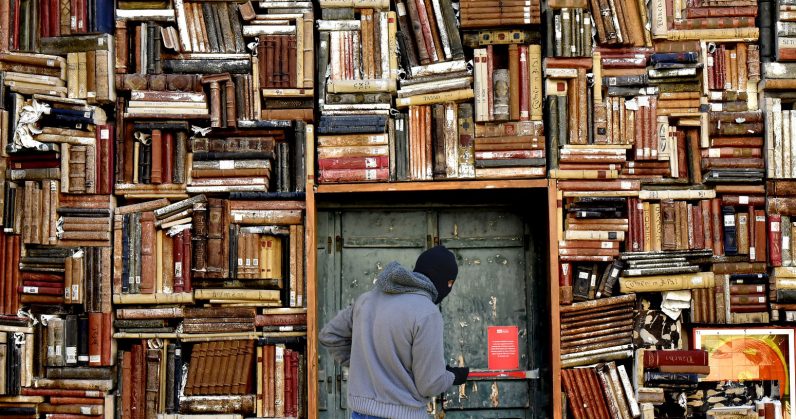 Patrick Reames earned over $20,000 selling books on Amazon last year. He didn’t see a dime of it.

Reames, a credited author who’s earned money selling books on Amazon in the past, first learned of the mistake after receiving tax paperwork from the company. His 1099 form reported almost $24,000 in income, all from selling books via Createspace — Amazon’s self-publishing arm that allows anyone to sell their work on the platform.

The work, though, wasn’t his. He told Brian Krebs, from Krebs on Security:

Based on what I could see from the ‘sneak peak’ function, the book was nothing more than a computer generated ‘story’ with no structure, chapters or paragraphs — only lines of text with a carriage return after each sentence.

Computer-generated writing with a $555 price tag; this isn’t something destined for the best seller list.

But it’s not alone. Reames found numerous other works that were, at best, questionable. A search for Vyacheslav Grzhibovskiy leads to dozens of Kindle books, all of which appear to be the same computer-generated gibberish. Most of these are either free or a few dollars, while others are priced between $220 and $320.

Amazon, for its part, serves as an attractive way to launder money compared to, say, bitcoin. If bad actors can stomach the 40 percent cut Amazon pockets, the platform increases liquidity by allowing direct connection with a bank account. So rather than using multiple exchanges and a tumbling service — which mixes cryptocurrency coins to decrease traceability — hackers now need only a compromised Amazon and bank account. And on the dark web, both are on offer for just a few dollars.

“Its not hard to imagine how these books could be used to launder money using stolen credit cards or facilitating transactions for illicit materials or funding of illegal activities,” Reames told Krebs. “I can not believe Amazon is unaware of this and is unwilling to intercede to stop it. I also believe they are not properly vetting their new accounts to limit tax fraud via stolen identities.”

Amazon has since removed the bogus listing and several posts in its discussion boards pertaining to online fraud. For Reames, this is of little solace. The company has, so far, refused to issue a new 1099, leaving him on the hook for income he didn’t collect come tax time.

Update: Amazon has since removed its support forum entirely.

We’ve reached out to Amazon, but representatives weren’t immediately available.

Money Laundering Via Author Impersonation on Amazon? on Krebs on Security

Read next: How Israel's kibbutzim are becoming high-tech hubs