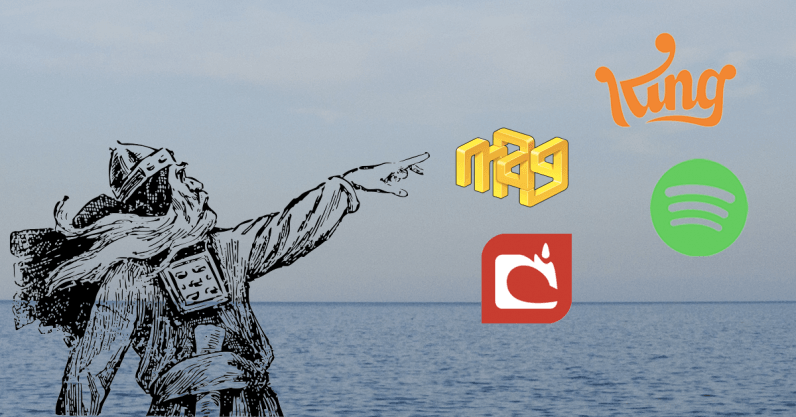 Sweden is an Eden-like country for tech startups and that’s no news. If you want to start an innovative business, the land of Nobel Prize, Volvo, and Ikea offers top-notch infrastructures, simple regulations, and a smart tax legislation.

The corporate tax rate is as low as 22 percent yet income taxes are relatively high which makes Sweden doubly appealing for new business ventures. On the one hand, the government doesn’t cannibalize your company’s profits while, on the other, it has the financial resources to guarantee extensive welfare packages that constitute a much-needed safety-net for groundbreaking yet risky business ideas.

In frozen Sweden, unicorns do find pastures to graze. Over the years, five Swedish startups reached the coveted $ 1 billion evaluation: Skype, Spotify, King, Mojang, and Klarna. The country has 20 startups every 20,000 employees — compared to five in the United States. Sweden is so crazy about startups and innovation that even the Church — usually not the most progressive club in a country — invested $ 5 million in the sector.

For our series of Growth Stories, I’ve been interviewing many CEOs of fast-growing Swedish companies. Different hallmarks of this idyllic ecosystem struck me but one, in particular, stood out. All those startups products were at the end variations on the same business theme: make content valuable again.

Spotify is possibly the most remarkable example. Since its inception in 2008, the company defibrillated a dying music industry implementing what has been branded as a “sustainable business model for artists.” Despite good intentions, the company got its fair share of criticism from people that didn’t feel the compensations were high enough

The company always replied that its product massively migrates users away from piracy. In the Internet age — they claimed — Spotify represents the best of all possible worlds for musicians. Spotify is now almost worth $ 20 billion and filed to go public.

On a relatively smaller scale, dozens of other companies set on the same mission. Acast, for example, is a hugely successful podcast platform that’s spearheading the field of voice-first technology. Soundtrack Your Brand is a b2b version of Spotify (yeah, it’s illegal to stream music from Spotify in your store). Epidemic Sound produces music for online creators. And these are only audio-related companies.

Then, there are the legions of game publishers. Colossi like King, Mojang, Paradox, and Mag Interactive gave the world viral hits such as Minecraft, the Candy Crush saga, and Ruzzle. When Steam announced its first Steam Awards in 2016, 11 out of the 100 awarded games were brewed in Sweden. An astounding stat, given the country’s dimensions and its number of game development studios.

And finally, there’s “newstech,” a sector busy with finding a sustainable business model for journalism. Stockholm hosts at least nine notable startups that are trying to make the news easier to monetize.

A couple of weeks ago, I was chatting with Magnus Hultman, a founder whose company Strossle falls under this latter category. After he repeated once again that its company’s mission is to make journalism pay again, I couldn’t help but ask if he knew why this is such a common trait in Swedish startups.

“Oh, I know why,” he quipped. “It’s because this is the land of Piratebay!” The answer begged further clarifications. “We were the first to pirate music, films, and books. We were the digital vikings out there stealing content! Then, we realized that stealing is not a sustainable business model. If you just keep plundering, soon there’s nothing left. The loot is gone. So we needed to fix what we broke. That’s why Spotify got started. And that’s why thousands of years ago we became Christians, leaving our hideous viking helmets and swords behind.” Magnus concluded the explanation with a decisively not viking smile.

At first, I felt that sounded a bit too simplified and sales-y, just a good marketing tagline without much reality behind it. The somewhat essentialist approach almost reminded me of Montesquieu’s The Spirit of the Laws where the French philosopher paired climate and society, claiming that Nordic men were braver, more honest, and less suspicious towards others because of the cold they endured.

But then I realized that maybe Magnus explanation might actually have some truth to it. The “digital vikings” hypothesis seemed a viable way to get a good grasp of Swedish tech ecosystem.

Swedes might have left their helms and swords behind, as Magnus explained, but the colorful metaphor of the “digital vikings” was just too good to not be used to illustrate the Swedish tech ecosystem and some of its aspects that are usually overlooked.

We then launched our quest to find the habits that make Sweden tech startups the great vanquishers of the digital era. Here they are.

If you don’t own it, then just take it. That’s what vikings used to do. But after destruction, there was always construction. Vikings conquered Normandy but then they implemented a sophisticated social system. In the Middle Ages, the loot was made of gold and gemstones, nowadays it’s content that — 20 years after Bill Gates famous essay — is still king. The digital vikings startups have found new, legitimate ways to appropriate content (music, news, podcasts,…) and make it valuable again. They understood that all the big digital platforms (Facebook, Amazon, Netflix,…) are useless without it.

2. Sail across the sea

It doesn’t matter that Sweden is one of the best country in the world to live in, for your business it will never be enough. Swedish companies are always built to go international soon or later. And this has always been the case. This long and established tradition is a valuable asset in the contemporary digital world where business ventures must have an international mindset from the beginning.

3. Learn new habits from the lands you conquer

The digital vikings are great conquerors but they’re also eager to pick up new habits and trends from the lands they go ashore at. “When you live in a country that it’s often dark and cold, you get curious about the rest of the world,” says Magnus Hultman.

Swedes always keep an ear to the ground, staying abreast of innovation. “We’re a society of early adopters,” adds Therése Gedda, founder and CEO of Swedish startup 30minMBA, “for this reason, Sweden is an excellent test market for b2c companies.”

The digital vikings are not particularly fond of hierarchies. Only results and performance grant authority. And also in that case, the leadership style generally consists of entrusting people with freedom and responsibility. In a lowly populated country such as Sweden, you always lack good people and you can’t waste them on bureaucracy and tedious tasks.

“Flat hierarchies are a consequence of our decision-making process,” says Leandro Saucedo, Global Head of Strategy at Acast, “In the Nordics, decision making is about trying to get consensus. If that’s not possible, you try to get at least a qualified majority. This easily leads to flat hierarchies where every voice counts.”

Trust is probably the essential value for digital vikings and it tracks back to their rural heritage. “This is our Jantelagen, the law of Jante,” proposes Malin Lundell, marketing manager at MAG Interactive, “it’s a term that describes a typically Nordic attitude. There’s a strong emphasis on the importance of growing together. If you want to achieve something great, it doesn’t mean you need to throw under a bus your colleagues to succeed.”

When Norse warriors ransacked the British coast, they didn’t go on a single boat (as they do in Asterix comics.) Instead, they used a proper fleet that was big and strong enough to implement their vision. Digital vikings emphasize the importance of infrastructures.

Examples proliferate. In 1995, the Swedish government launched a “Home PC offering.” Anyone who bought a computer with an Internet connection could deduct it from the income tax. A few years later, in 1999, the government issued a statement saying that everybody in the country required the broadband because that was the future.

It’s not by chance that Sweden boasts one of the fastest average Internet speed in the world. Also in the case of 3G, the adoption was fast and widespread. This was because the government gave the licenses not to the highest bidders but to the companies that promised the best coverage.

7. Vikings are a tight-knit community of innovators

When you know that you have a community of vikings to fall back on, you dare to innovate. Sweden’s social welfare system has supported people in taking risks and make their dreams come true. “Universities and colleges are free,” reminds Björn Fant, co-founder of online store Hemmy.se , “in addition, students can get a low-interest loan from the government to cover their living expenses. Someone says that this is the best venture capital we have.”

Johannes Schildt, CEO and co-founder of healthcare startup Kry, adds: “It’s this dual dependency between state and industry that has laid out the foundation for the tech-oriented entrepreneurship that we see today.”

Despite all the benefits, digital vikings’ history presents its fair share of failures. “You should always remember that this is the second Swedish tech invasion,” comments Leandro Saucedo, “and the first one didn’t go particularly well. A lot of businesses went belly up. A spectacular example of failure was Boo.com, a kind of Lesara avant la lettre that burnt $ 135 million of VC capital in just six months.”

But now digital vikings’ longships have the wind in their sails, right? “Nowadays, we have the opposite problem,” adds Leandro, “we’re already at the third wave of invasion. The ecosystem works like a charm but there’s also a lot of pressure that there wasn’t before. All the companies want to be the next Spotify but often they lack the patience and a long-term vision.”

—
This article is brought to you by TNW X and Adyen with the collaboration of Strossle. Fast-growing startup? We dare you to prove it. Tech5 is our annual competition that celebrates Europe’s fastest growing tech companies. Signups are open.

Read next: The Nix Color Sensor matches your color every time...and it’s 30% off