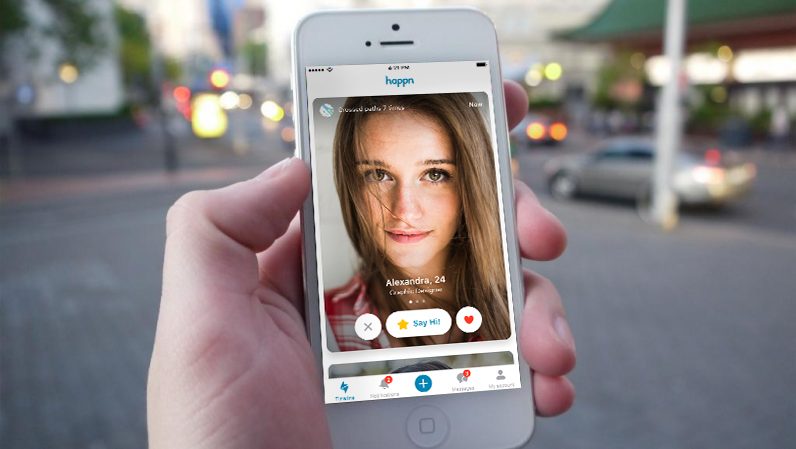 This interview is part of our series of Growth Stories. We interviewed the founders and CEOs of 20 of the fastest growing startups in Europe. The series is a lead-up to Tech5, the annual competition that we organize in partnership with Adyen to celebrate Europe’s fastest growing tech companies. Signups are open.

Apparently, singles care less about Valentine’s Day than ever. However, the celebration is still important for dating apps, just as Christmas is vital for platforms like Amazon.

If you’re looking for your Valentine, there’s a plethora of digital courtship tools out there, for every taste and paraphilia. Among them, French company Happn brands itself as the “hopeless romantic” of the bunch.

Thanks to real-time geo-localization, Happn allows you to connect with the people you’ve crossed paths with. If the feeling is mutual, you have a “crush” and can start messaging.

“We’re the sidekick of serendipity,” said proudly Didier Rappaport — the CEO and founder of Happn — when I reached out to him to know more about his company and its conspicuous growth.

TNW: Happn has been around for 4 years. How did it change over time?
Didier Rappaport: There have been a lot of modifications of course, but mostly invisible. We never introduced major changes in the product, but this is going to change soon, very soon.

That’s big news. What’s going to change?
I can’t reveal the details yet, but I can say that we’ll massively implement artificial intelligence. Moreover, we have just changed the product design and in-app layout of our timeline.

To me, Happn always reminded of an augmented reality app. I don’t mean technically but conceptually. At the end, what you do is bridge the gap between real and digital lives. Almost the Pokémon Go of love.
I think you understood the direction Happn is taking… the winners of the future will be the people able to reconcile the digital and the physical world. And to show that at the end there is just one world. This is the big intellectual challenge and business opportunity that we’re facing.

Sometimes it seems that these matchmaking apps are more about data than dating. What’s your take on the matter?
Dating businesses have always also been data mines. Just think of the questionnaires that customers of wedding agencies had to fill in. But it’s true that we operate at an unprecedented scale. We have huge flows of fresh data that roll-in every day.

You’re surely aware of the criticism that dating apps aren’t careful enough with people’s data. And it’s not just punditry but fact-based research. Are you concerned by this issue?
For us, this is not “a concern.” The safety and privacy of our users is the central pillar of our company and our mission. But you should also consider that most of our data comes from Facebook and is already publicly shared.

What has been the biggest challenge to the growth of Happn?
Doubtlessly, the high marketing expenses. But we’re really close to profitability. It’s a 2018 goal.

You had two professional lives. First, you were an international textile trader, then the Internet arrived and you immediately spotted its potential, venturing into this new world when you were 40 years old. How come?
For me, the Internet was like the Far West. I spent three hours a day reading about what was happening in the world. I understood quite easily when new trends were taking hold. That’s how I saw the Internet revolution coming.

What are the key qualities to lead a successful business life?
I think that there are two key factors. The first one is the ability to see new opportunities. And the second one — without which the first one is worth nothing — is the will to work a lot. Sometimes, journalists ask me “from where does your vision come from?” Visions don’t come out of the clear blue sky. I just work a lot.

What’s a question you’d like to ask the other founders that I’m interviewing in this series of Growth Stories?
I don’t have any question. I just want to tell my colleagues that they’re really lucky to do what they’re doing.

—
This article is brought to you by TNW X, the Happn for business liaisons between startups, governments, and large enterprises.
Didier Rappaport will also speak at TNW Conference 2018. Don’t miss out on one of Europe’s leading tech fest. Early-bird sales end soon.

Read next: Navigate Adobe Photoshop, InDesign, and Illustrator like a pro