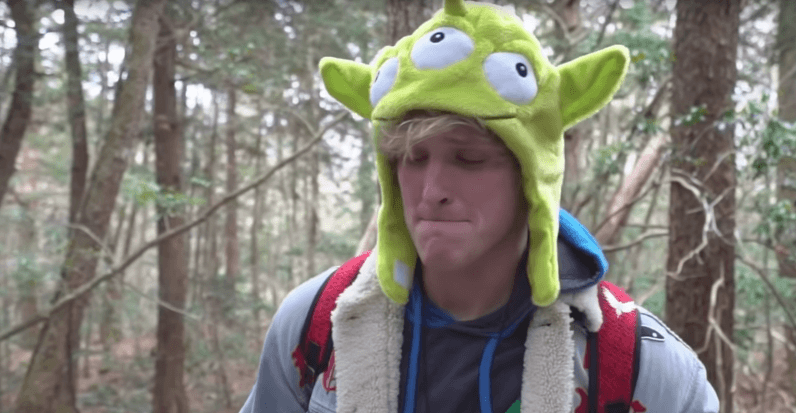 YouTube star Logan Paul is facing a loud backlash after filming and uploading footage purportedly showing a dead body in the notorious Aokigahara forest in Japan – one of “the world’s most popular suicide sites.”

In the the clip, which was originally posted on Sunday but has since been removed, the 22-year-old vlogger sets out to explore the “haunted aspect” of the forrest. But unfortunately, things swiftly get too real when he and his friends stumble upon an apparent suicide victim.

“This is not clickbait, this is the most real vlog I’ve ever posted to this channel,” Paul said in the now-wiped video. “I think this definitely marks a moment in YouTube history because I’m pretty sure this has never hopefully happened to anyone on YouTube ever. Now with that said: buckle the fuck up, because you’re never gonna see a video again.”

While the footage shows the purportedly dead person with his face blurred out, the YouTuber can be heard making remarks which viewers have since condemned as “disrespectful” and “appalling” – and not without a reason.

Following a public outcry from the community, Paul went on to issue an apology via his official Twitter account.

In the apology, the YouTuber claims his intention was to “raise awareness for suicide and suicide prevention” and not to merely sensationalize a person’s tragic death to further build his following.

“I didn’t do it for the views,” the young vlogger explained. “I get views.”

What makes this incident particularly troubling is that the shocking video was briefly recommended by YouTube on its official trending page.

Following the public fallout, YouTube has since come forward with a statement of their own. Here is what the video sharing service had to comment on the matter, as obtained by popular YouTube personality Philip DeFranco:

I just received an official statement from a contact at @Youtube regarding the outrage and controversy around Logan Paul’s (now self-removed) “We found a dead body” top trending Youtube video.

I’ll save my personal comment for later. Just wanted to pass this along. pic.twitter.com/JNTQDMVvT4

In their response, YouTube reminds users that its platform strictly forbids distributing “violent or gory content posted in a shocking, sensational or disrespectful manner.” But while it seems Paul’s video breaches some of these terms, the company refrains from passing on further criticism to the young creator.

YouTube’s refusal to come out with a stronger stance against the disturbing video has urged some users to question the company’s policies regarding violent content:

i guess i’m just dumb as hell because this didn’t seem to say anything at all.

This is resoundingly hollow when it had literally millions of views and was on the Trending tab, something they so clearly control and influence. Ridiculous statement from a platform that is increasingly finding itself mired in controversy like this under the current leadership.

Paul, whose younger brother Jake also runs a popular channel on YouTube, is no stranger to controversy.

The two siblings, who got their early beginnings on the now-deceased Vine, have established themselves as some of the platform’s most viewed creators – though not without attracting the wrath of the community with their deliberately sensationalistic tactics.

The popular brothers recently released a series of promo videos, shamelessly masqueraded as playful Christmas songs, in which the YouTubers encourage their mostly underage followers to spend their parents’ money on ridiculously overpriced merchandise – like Paul-branded hats and hoodies.

Prior to the Christmas merch shenanigans, Jake Paul was caught wreaking havoc in the suburbs of West Hollywood, after numerous neighbors complained about voice disturbances. The scandal ultimately cost the younger Paul brother his role in the teenage Disney production Bizaardvark.

If you or anyone you know is considering suicide or experiencing intense feelings of anxiety or depression, please contact the National Suicide Prevention Lifeline at 1-800-273-8255. You are not alone.