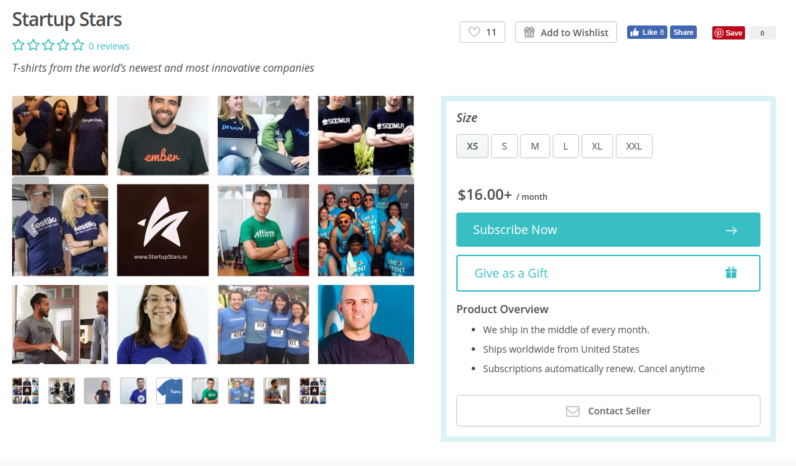 There’s a certain allure to working for a technology startup. For a lot of people between the ages of twenty and thirty, their ideal job meets the stereotypical Silicon Valley trope — working with people in their age group on exciting problems, offices furnished with pool tables and on-tap beer, and eventually becoming a millionaire after the company lands a ridiculously skewed valuation.

But for a lot of people, that’s a pipe dream. That said, they could always just pretend.

Startup Stars is a monthly subscription service where, for $16 a month (plus $4 shipping), it’ll send you a T-shirt from a random startup. For most people in tech, that’s a pretty novel idea, not least because company T-shirts are typically doled out for free at events and conferences. I’ve got at least 10 gathering dust in my wardrobe.

The package also includes the company CEO’s business card, in case you want to send over your resumé, or convincingly lie to people you meet that you’re a hotshot founder.

The service is the brainchild of Dan Bloom; a Raanana-based entrepreneur who previously launched a candle subscription service called Earth, Wax, and Fire. Bloom offers the service to startups for free, although they have to provide the shirts and the business cards.

So far, he says he’s managed to sign up two companies. There’s Proov.io, which does something dull and B2B-y that I don’t really understand, and Foobot, which makes a Nest-compatible air quality monitor. Other companies are on the horizon, he claims, although he declined to name any names.

Amusingly, the CrateJoy profile for Startup Stars (CrateJoy is a bit like Etsy/Shopify for subscription services) has pictures of T-shirts for companies that aren’t taking part. I reached out to several of these companies as part of the fact checking process.

Jon Nevvit, VP of Marketing for TayKey, said “We were actually unaware that our t-shirt was being sold as part of this bundle. It’s a bit bizarre… I guess we’re flattered.”

I also spoke to Talia Shani, Head of Marketing for Yotpo, who was especially surprised to see a picture of herself on the Startup Stars page.

Bloom later confirmed that this was a mistake, explaining that the pictures were for illustrative purposes and should have been removed before the product went live. Oops. He also said that, as soon as CrateJoy approves his changes, the erroneous pictures will be removed.

But is it really that strange? Startup culture (or, at least, the rose-tinted view of startup culture that ignores the rampant burnout and overwork) is weirdly fetishized. Just look at the runaway success of movies like The Social Network, and TV shows like Silicon Valley.

A cocktail of aspiration and allure has turned lithe nerds like Mark Zuckerberg into celebrities. People want to be like Elon Musk or Evan Spiegel. They want to own billions, drive supercars, and date supermodels. And for most people, that’s just not going to happen. So, why shouldn’t they play dress-up?

Read next: Skyroam Solis review: unlimited LTE data in over 100 countries, but do you really need it?