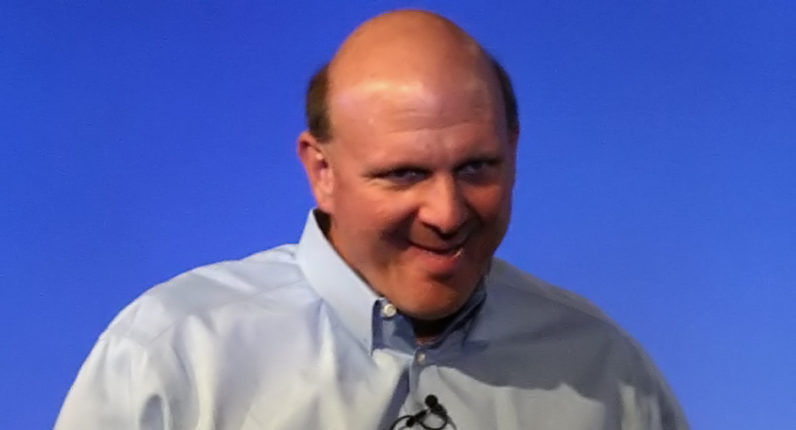 Nostalgia is in the air at TNW Towers. It’s Windows 95’s birthday, and our Slack channel is filled with reminiscing about Microsoft’s 90s halcyon days.

Back then, Microsoft was top dog. IBM’s desktop aspirations were fading fast, and Apple was officially the sick man of tech, shoveling out more stinkers than a golden retriever after dinnertime.

Microsoft was in a position of unparalleled strength, and its confidence oozed into everything it did.

When it launched Windows 95, for example, no expense was spared. Redmond spunked an insane $3 million on the rights to The Rolling Stone’s Start Me Up, which became the anthem of the operating system.

Incidentally, it was the first time the iconic British rock band had allowed its music to be used in a commercial.

And because I can, here’s a video of the comedy duo of Ballmer and Gates awkwardly dancing to the track. It doesn’t matter if you’re the richest men on the planet — the Internet never forgets.

Microsoft even recruited Jennifer Aniston and Matthew Perry, of Friends fame, to create a video guide to Windows 95.

It’s undeniably cringeworthy, but there’s something incredibly deliberate about it; Microsoft knew that its dream of “a computer on every desk and in every home” was close to being realized. By tapping into celebrity power, it could talk about the merits of Windows 95 to a more mass-market audience.

Things got weirder when Microsoft founder Bill Gates dressed up as a member of the Trenchcoat Mafia and inserted himself into first-person shooter Doom, in order to extol the virtue of Windows 95 for gaming.

And to show its multimedia capabilities, Microsoft also included a copy of the music video to Weezer’s Buddy Holly.

And in case you didn’t think Microsoft was extravagant enough, it also gave everyone in London a free copy of The Times newspaper, and decked out the Empire State Building in Microsoft’s corporate colors.

Microsoft’s sense of playfulness continued for a few years. When it launched Windows XP, it turned Times Square into an honest-to-god fairground, and threw a free concert featuring Geordie crooner Sting.

For Windows 98, Ballmer and Gates lampooned SNL’s Night At The Roxbury. It has to be seen to be believed.

Microsoft is stronger than ever. Windows 10 is a damn fine operating system; perhaps the best it ever released. I’m using it right now, in fact.

Sure, the company messed up when it came to mobile, but it’s kicking ass in other (arguably more valuable) areas, like AR and cloud computing.

Microsoft should be as confident as it was in 1995. Perhaps even more so.

So, how come their more recent launch events are (comparatively speaking) rather dry. The tech is undeniably cool, but it all feels really business-like and serious. Where’s the sense of childlike playfulness? Where’s the extravagance?

Why hasn’t Satya Nadella dressed up as Master Chief and fragged some grunts yet? Imagine how cool it’d be if Microsoft bought Wu Tang’s Once Upon A time In Shaolin, instead of pharma bro Martin Shkreli, and used that as the launch music for Windows 10 creator’s edition. I want to see Bryan Roper and Joe Belfiore throw some shapes, dammit.

If I had to hazard a guess, it’s because there was a point where Microsoft wasn’t doing so hot. Can you imagine the challenge of getting people excited about Windows fucking Vista?

Read next: Cryptocurrencies and blockchain to change the finance trade and more