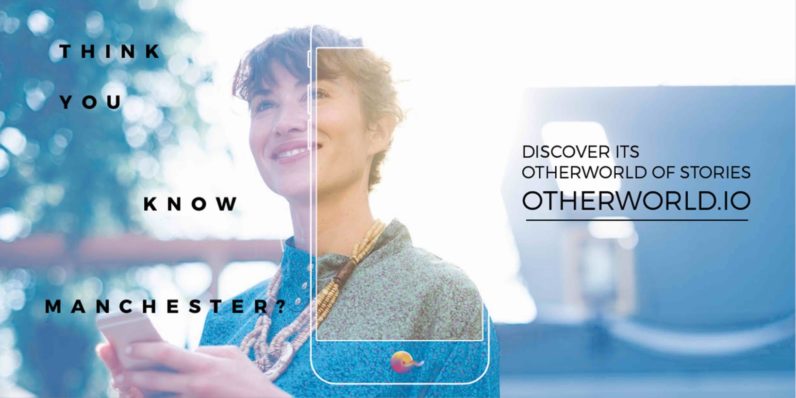 So, why aren’t they interested in what’s happening in their local communities?

Perhaps it’s the medium. Struggling local newspapers tend to be a sorry affair, with more adverts for used cars and funeral services than actual news. Like No Other founder Stuart Goulden thinks that the savior for local news is in location-based storytelling, and he’s bringing his vision to Manchester’s city center, thanks to a generous grant from Google’s Digital News Initiative.

This project, Otherworld, is an initiative from Like No Other. To bring it to life, Goulden placed a network of Google Eddystone beacons across the city of Manchester. These beam stories directly to the phones of passersby. When they leave the range of the beacon, the stories disappear from the user’s device.

“The idea is that those stories are immediately more relevant, because you can see what it relates to, and it’s not an abstract area of the city that you’ve never been to.”

Goulden also pointed out that by making the distribution of news articles contingent on the reader’s location, they’re better able to act on them. “There could be an event that’s happening 20 meters in front of you, or you might have witnessed an incident that the police are looking for help for.”

The beauty of this approach is that it works without a dedicated app. News stories open within the browser. As long as the user has Google Chrome installed on their mobile device and Bluetooth turned on, they’ll be able to take part in this experiment in local journalism.

Already, Goulden has snapped up some content partners, which he calls ‘institutions.’ Perhaps the biggest name amongst them is Trinity Mirror, which owns dozens of major local newspapers across the UK, like the Liverpool Echo and Manchester Evening News, as well as several national titles.

The experiment will run from the July 25 until the end of the year. Goulden is conscious of the fact that this hasn’t been done before, describing it as “highly experimental,” and saying he’s “testing an untested idea.” From speaking to him, he’s acutely aware of the possibility he might fall flat on his face.

But if he’s successful, Otherworld will have done the impossible and figured out how to get young people to engage with local news. This has some exciting implications, especially when it comes to getting young people interested in local politics, which is often the preserve of the gray and aged. Watch this space.

Read next: China's forcing its citizens to install a terrifying Big Brother app on their phones - or go to jail