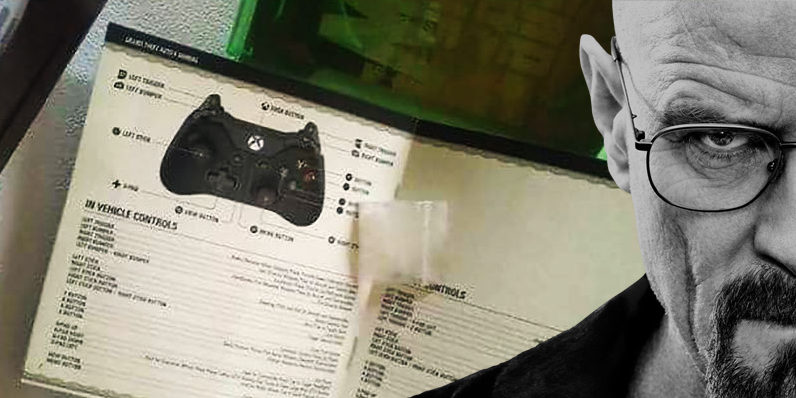 In what could’ve been a thrilling pot twist from Breaking Bad, Florida-based mom Kayla McAllister purchased a used copy of the smash-hit game GTA V to her 11-year-old son and was shocked to discover a bag of meth inside the box.

As the concerned mother explained in a post on Facebook, she and her son copped the game from a Capital West Tallahassee GameStop location hosting a Sunday trade-off for old releases. It was only later – during the game’s lengthy installation – that the boy stumbled upon the white substance hidden inside the manual.

McAllister proceeded to call the police, who later confirmed the packet indeed contained illegal drugs. Here is what her Facebook post reads:

Today i took my son to gamestop in Tallahassee to trade in games and get some new ones. When he opened the booklet inside one of the pre owned games he ( MY ELEVEN YEAR OLD SON!!!!!!!) found this. A baggie of fucking meth! Clearly the game was not properly checked when it was traded in and because of the carelessness i could have lost a child. Thankfully He brought it right to us and said what is this?

Kotaku has since obtained a copy of the police report filed with Gadsden County Sheriff’s Office.

Following a field test, the officers dispatched were able to confirm the substance inside the small zip lock bag was indeed methamphetamine.

This marks at least the the second time GameStop customers have complained about coming across narcotics inside boxes purchased from the popular gaming store.

Back in September last year, another 11-year-old found a forgotten baggie of meth in a Lake Charles GameStop location.

GameStop has since told Kotaku it regrets the incident and is in contact with police to help them advance the investigation:

We are disappointed to hear about the experience one of our customers recently had when purchasing a pre-owned video game from one of our local Tallahassee, Florida stores. We work diligently to ensure the quality of our pre-owned items are like new. Unfortunately, in this circumstance our thorough process fell short. We are extremely concerned that this incident occurred, and are working with the local police department to support them in their investigation.

In any case, next time you shop from GameStop: Better double-check that box carefully before handing it to your children.

Read next: Google is launching 360-degree cameras built to make your own Street View