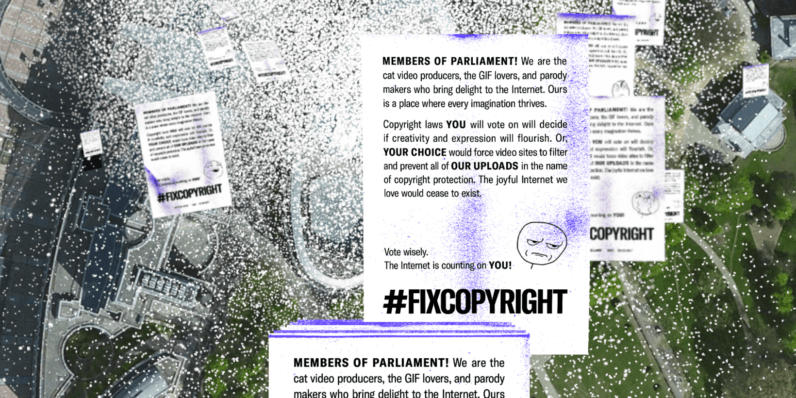 Mozilla continues its march for better copyright laws in Europe and the company is back with yet another online campaign. This time it wants your help to drop millions of virtual leaflets from the sky to let EU officials know that outdated copyright laws are “threatening the health of the internet.”

Teaming up with Dutch creative studio Moniker, Mozilla has launched an interesting campaign that “urges EU lawmakers to modernize copyright law for the 21st century.”

Paperstorm – as it is called – is essentially a clone of the popular app of the same name that, instead of virtual paper planes, unleashes countless digital leaflets protesting the currently proposed copyright reforms in the EU.

Once you’ve dropped a certain number of leaflets, you’ll get a chance to tweet your complaints, accompanied by the hashtag #FixCopyright, directly to key officials like Chair of the EU Parliament Committee on Legal Affairs Pavel Svoboda.

As the company explains, “if enacted, [the new proposal] would introduce content filtering and neighboring rights – rules that would stifle innovation, free expression and openness online.”

“We are especially concerned about the provisions calling for mandatory upload filters, which would force online services from Soundcloud to eBay to Wikipedia to monitor all content posted online in the name of copyright protection,” said Mozilla Senior Policy Manager Raegan MacDonald.

“Such an obligation would have a disastrous impact on the internet ecosystem, repressing free expression and wedging out smaller players,” he continued.

Now head to Paperstorm and make it rain on the EU officials.

on The Mozilla Blog

Read next: How high can weed tech go? Pretty high if you ask Silicon Valley