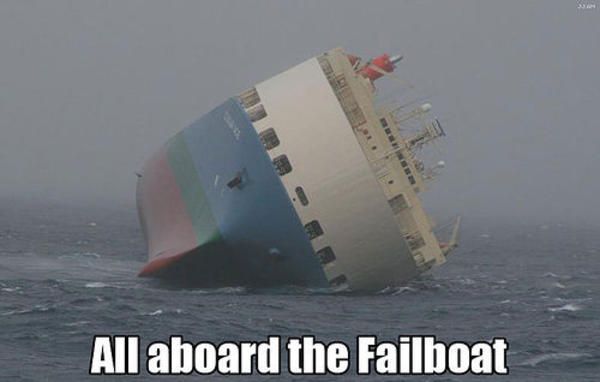 If Apple’s marketing is to be believed, the iPad is a versatile device, capable of being used in a number of different situations and contexts. 34-year old British skipper, David Carlin clearly took this to heart after he set sail in a World War 2-era Royal Navy training vessel, using just his iPad for navigation.

Sadly, things didn’t go to plan, as his iPad was connected to the Internet via Wi-Fi. As he left the port in the 50ft wooden Peggotty, he lost the data connection.

Without a working guidance system, Carlin’s boat drifted into a busy maritime shipping lane, where he was struck by a passing ferry. The humbled would-be sailor then had to issue a mayday call, as his vessel sunk to the bottom of the Humber Estuary.

Life, as they say, comes at you fast.

For his trouble, Carlin has been suspended from his job, and fined over £3000 for breaking UK maritime laws. Consider it a stupidity tax.

Perhaps what’s most unfair about this story is the 60-year old Danish captain of the ferry, called Petunia Seaways, was oblivious to the collision, and was also fined £3000.

Read next: Florence uses ‘digital graffiti’ to protect its cathedral