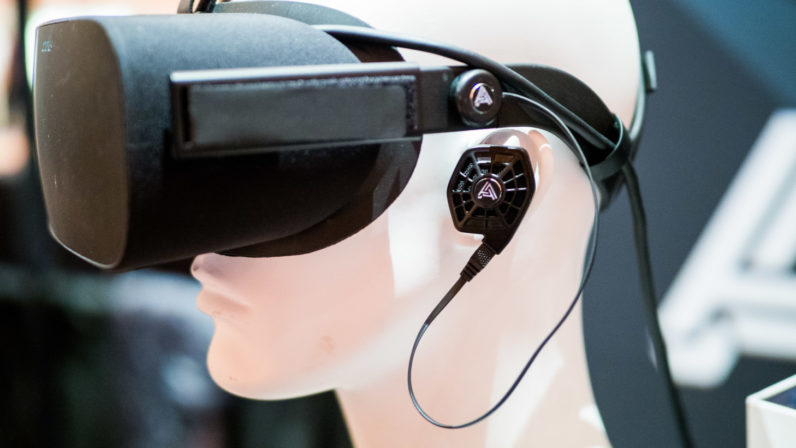 Audio is the most underrated part of the VR experience, but companies are finally starting to pay attention (look at Microsoft teaming up with Dolby). Now Audeze is promising the best VR audio experience you can get with its $400 iSine VR headset, announced at CES.

You might’ve heard of Audeze’s iSine series before; they are to date the world’s only planar-magnetic in ear monitors. That’s because they’re basically just giant drivers with a casing that funnels sound directly into your ears.

The iSine VR are a permutation of the lowest-end (but still very good) iSine 10, except they include short connectors made specifically for some of the top VR headsets on the market, including the HTC Vive, Oculus Rift, PlayStation VR, and StarVR units. While you can connect a 3.5mm headphone to most headsets, the idea is that you don’t have to worry about a mess of wires tangling up your mobility in VR.

Of course, it would suck if your $400 headphones only worked with VR headsets, so Audeze also includes a standard 3.5mm cable for use on the go, which pretty much turns them into a pair of iSine 10s.

Not that that’s a bad thing; the iSine 10 are spectacular (I’m in the process of reviewing them now). Moreover, they’re the rare high-end IEM (in-ear monitor) with an open back.

That’s not always ideal for a commute, but for VR, open-back headphones may be superior: Oculus purposefully decided to use open back headphones for its own headset, and Audeze says using active noise cancellation or totally isolating headphones exacerbates disorientation issues.

Anecdotally, I’ve also found this to be true. I prefer strong isolation for everyday listening, but there’s something about open back headphones that make them more immersive for VR, and few of them can reach as low as 10 Hz like the iSine do. It also doesn’t hurt that the iSine have the widest soundstage I’ve ever heard from an IEM (which they should, given their size and design).

Of course, you probably don’t need them. $400 is a lot to pay for any pair of headphones, and you’ve probably already burnt through your wallet on your VR rig.

But if you want the best VR experience and money isn’t a factor, at the very least these exist for you to mull over. Plus you’re getting a darn good pair of headphones for your music too.

That said, though Audeze says the iSine VR are optimized for immersive experiences, as far as I can tell, they really are just identical to the iSine 10 – which cost exactly the same. Audeze is just capitalizing on VR’s growing popularity. Can’t say I blame them.

Read next: The Sirius A is a pocketable PC with more ports than your MacBook Pro