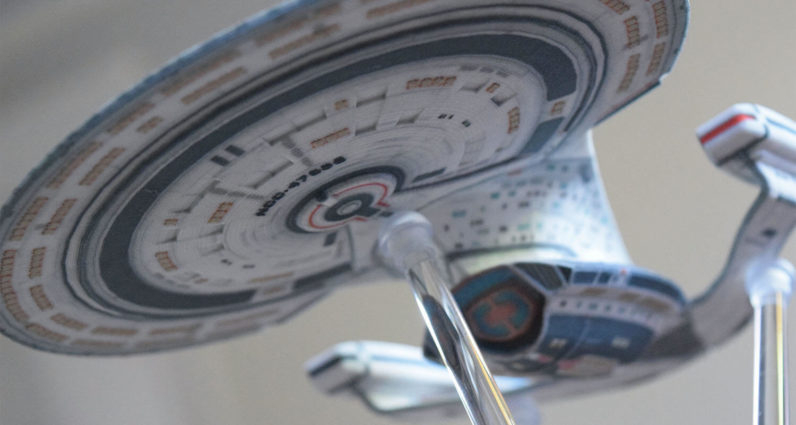 If you’ve ever dreamed of having your very own USS Enterprise or Defiant on your bookshelf, you’re in luck. It’s now possible to buy your own full-color, 3D printed Star Trek starships direct from Eucl3d.

Founded by three UC Berkeley grads, Eucl3d wants to make it easier to turn the fantasy worlds you see on TV (and at the cinema( into something tangible. To do this, it has teamed up with with Cryptic Studios, Perfect World, and CBS to allow users to create their own Star Trek replica vessels.

So far, there are almost 400 vessels to choose from. All of these are from the hugely popular MMORPG, Star Trek Online. You can build such iconic vessels as the USS Defiant, from Star Trek: Deep Space Nine, and the Galaxy-class USS Enterprise-D, which was Captain Jean-Luc Picard’s chariot during The Next Generation.

It’s not just Federation ships on offer either; you could make yourself a Romulan Warbird, or a Klingon Bird of Prey.

It’s worth emphasizing that these are fully licensed, and have the blessing of CBS, who own the Star Trek rights. This is quite unlike some other fan-driven efforts, like Star Trek: Axanar, which have fallen afoul of CBS’s lawyers.

They can be customized too. According to Perfect World Entertainment, buyers will be able to build their models with a variety of “customization options, material variants, shield material variants, color variants”, as well as choose the name of their starship, and its registry number.

The ships will be roughly 12 inches in size, and will be built in the USA. Pricing and availability details are yet to be announced, so boldly go to the Eucl3d website and register your interest on their mailing list.

Read next: Star Trek's iconic computer voice is back for Discovery, and possibly your phone