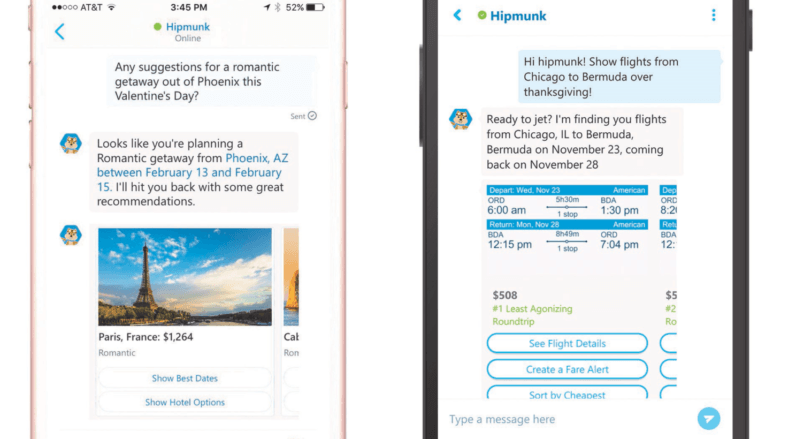 I can’t be the only one that’s still awe-struck by bots. The idea that you can book a flight abroad, order a meal from Burger King, or refresh your wardrobe by chatting to an algorithm is nothing short of mind-boggling to me.

At the forefront of this revolution in how people interact with brands has been Facebook, with Skype closely following. But that gap looks set to narrow, as Microsoft just announced five new bots, most of which tie into key travel and lifestyle brands.

The one I’m most excited about is for Skyscanner – one of the world’s biggest flight search engines. This lets you book tickets and find the cheapest fares, all from within your Skype window. The SkyScanner bot can also look for flights just based on vague places and dates, like “Belfast in April“, or “The Netherlands“.

This would be the third conversational bot Skyscanner has introduced, with the first being released three months ago for Facebook.

Skyscanner isn’t the sole key travel player Microsoft has partnered with. It’s also created a Hipmunk bot. As you might expect, this can book hotels and flights on your behalf, as well as dispense general travel advice. Think of it like speaking to a travel agent over IM.

There’s also a StubHub bot which makes it easier to buy and sell tickets to plays, concerts, and sporting events at a steeply-inflated price. Probably the most practical of the bunch is the IFTTT bot, which can message you when a particular thing happens, or someone shows up at your door.

Finally, there’s a Spock bot. Yes, from Star Trek. This teaches you the ways of Vulcan logic, but struggles to tell you why the latest films have been so terrible.

Over the past few years, Skype has steadily lost ground to FaceBook and WhatApp when it comes to instant messaging, as well as products like FaceTime and appear.in on the video chatting front. Whether bots could be the magic factor which breathes life into this ailing products remains to be seen.

Read next: This impressive new app is like Prisma, but for video