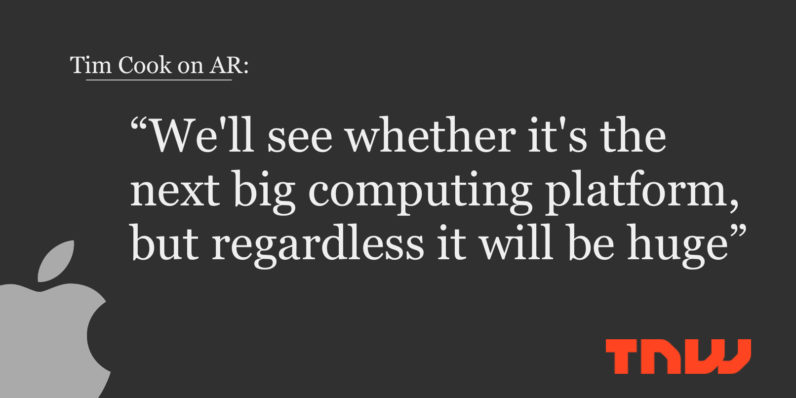 After the colossal success of Pokémon Go (are you as tired of reading that as I am of writing it?), Apple CEO Tim Cook outlined plans to continue investing in the technology as the company is “high on AR in the long run.”

The question was posed during today’s earnings call which saw Apple hit with a 15 percent decline from the same period last year.

As with most earnings calls, Cook artfully danced dodged most questions while hitting key wins (services, iPhone SE) and trying to deflect from big losses (iPhone, iPad, Macbook). He did, however speak candidly about Apple’s future ambitions as they pertain to augmented reality.

When asked about the breakout success of Pokémon Go and Apple’s future plans in the AR space, Cook said:

It also does show that AR can be really great. We have been and continue to invest a lot in this. We are high on AR for the long run, we think there’s great things for customers and a great commercial opportunity. The number one thing is to make sure out products work well with other developer’s kind of products like Pokemon, that’s why you see so many iPhones in the wild chasing Pokémons [sic].

While Apple has been tied to rumors of a secret virtual reality project — in typical Apple fashion — its letting the rumor mill run wild without actually confirming anything. In this case, we don’t really need Apple to confirm that something is in the works, as recent VR/AR acquisitions and multiple hires in the space obviously point to something going on over in Cupertino.

Curious though, is Cook’s outlook on the space as a whole, specifically:

“We’ll see whether it’s the next computing platform, but regardless it will be huge.”

For a company with big VR/AR aspirations of its own (seemingly), the ho-hum answer on the future of the technology seems decidedly un-Apple.

We’ll just have to wait and see.

Read next: Syrian artist uses Pokémon Go to showcase the harsh reality of life in a war zone