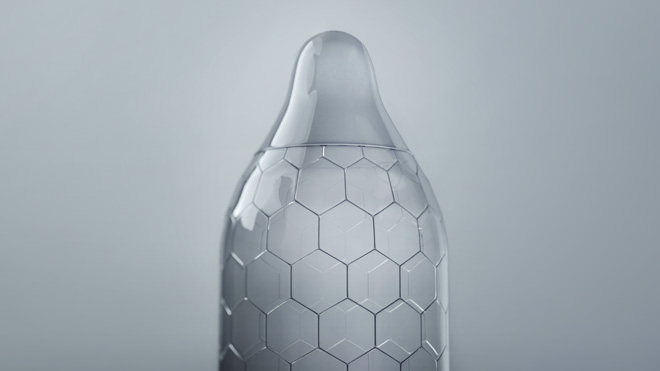 There’s nothing inherently wrong with condoms, but some Swedish designers and sex toy manufacturers have taken it upon themselves to reinvent the condom by turning it into what looks like a Norman Foster creation.

Called the Lelo Hex, the condom uses a honeycomb design to reinforce the strength. I got the opportunity to check out Lelo Hex at a launch party earlier this month and tried stretching and pulling the condom with all my strength, but condom managed to remain intact.

Despite this design, it’s not the thinnest condom on the market. The Lelo Hex measures in at around 0.055mm thick – many Japanese condoms clock in around 0.018 to 0.02mm.

The honeycomb design is also supposed to help prevent the condom from tearing apart completely when a hole is present. In a side-by-side comparison against traditional condoms, you can see how the Lelo Hex breaks by the hexagon rather than ripping and breaking entirely (though I imagine most of you don’t have penises with the diameter of a beaker.)

Of course, it doesn’t really matter how big the breakage is – if a condom is torn, it’s basically rendered ineffective. When asked, Lelo did not provide scientific studies to show that an isolated, smaller rip is safer than any kind of rip on a condom at all, but it did say it will be conducting said researches.

Did we mention Lelo got Charlie Sheen to be its product spokesman?

A few weeks since launch, now the company wants to enlist traditional condom manufacturers to help them make its honeycomb design the standard. On its crowdfunding page, it offers a $1 million pledge offer to Durex, Trojan, and Ansell so they can have access to its condom mold.

Lelo says it’s been 70 years since the condom was innovated, but maybe that’s because there wasn’t anything wrong with condoms to begin. When used correctly, it has a pretty high effectiveness rate at preventing pregnancy especially combined with other contraception methods like birth control pills or IUD.

The problem with condoms isn’t that it looks uncool or are ineffective. Most men just don’t think they’re comfortable to wear or use them improperly, and that’s nothing honeycombs can change.

Still, if you’re the kind of person who prefers Beats headphones for its fashion statement, maybe the Lelo Hex is for you. Who doesn’t want the Norman Foster look on their male companion?

Jokes aside, you probably don’t need the Lelo Hex, but if it convinces you to have safe sex, then all power to you.

Read next: If you're designing mobile apps or Websites, you'll want this updated piece of paper (seriously!)