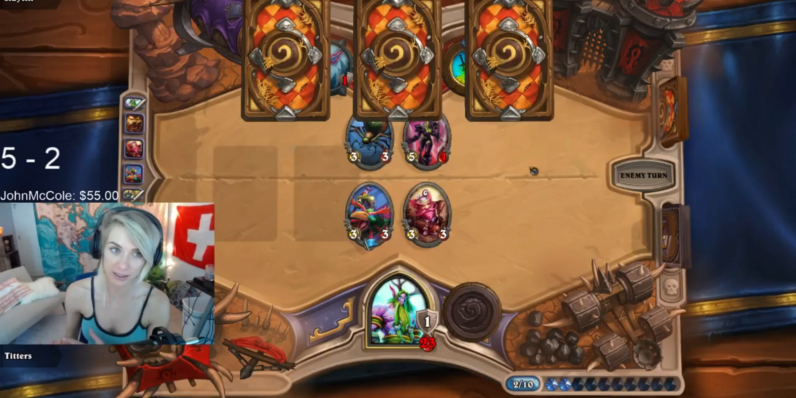 Many Twitch streamers are no stranger to large donations, but what would you do if a random stranger dropped $11,500 on you after seeing you play Hearthstone?

That’s exactly what happened to Twitch streamer ‘LegendaryLea’ during a recent session. The donations ended any notion continuing the game and led to Lea dancing across her room, ecstatic.

“What in the dickens are you doing to me?” she exclaimed, as Twitch user iNexus_Ninja made a $250 donation, only to follow that up with several more, totaling $11,500. iNexus_Ninja then went on to shower other streamers, like NoSleepTV, Sodapoppin and Dizzykitten with donations totaling nearly $50,000.

Turns out, iNexus_Ninja wasn’t a generous viewer, but instead a nasty troll that intended to make these large donations and then cancel them through PayPal after 30 days — leaving the streamers on the hook for any portions spent. In short, he was the worst kind of troll, the type that sought to create real harm through internet mischief.

Proving sometimes there is justice in the world, PayPal essentially told iNexus_Ninja — an 18-year-old Australian named Anthony Archer — to go fuck himself and that it wouldn’t be allowing the chargeback.

Comment from discussion iNexus_Ninja attempts to chargeback the thousands of dollars he donated to Chunce.

Archer, it seems had used his parent’s credit card to fund the transactions, as PayPal caught wind of the scheme and pointed Archer to its terms of service which details what is, and isn’t, eligible for a chargeback.

Turns out, knowingly making a donation and then changing your mind isn’t included in PayPal‘s ‘Buyer Protection’ program.

PayPal Refuses to Refund $50,000 to Twitch Donation Troll on Motherboard

Read next: 32m Twitter passwords may have been hacked and put up for sale on the Deep Web