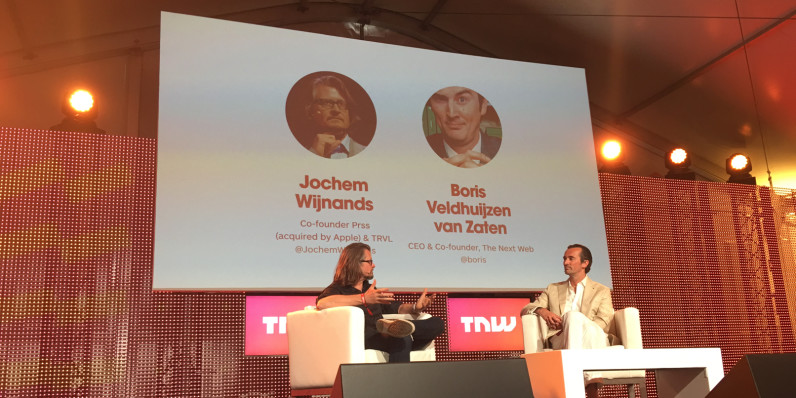 Sitting down over rijsttafel — an Indonesian rice dish (the word literally translates to “rice table”) — in Amsterdam, Jochem Wijnands begins to explain diversity in the Netherlands and how this small Dutch country now has some of the best Indonesian food in the world.

Our waiter refills my drink, I stuff a bite of semur daging (stewed beef) in my face and nod in agreement as Wijnands talks about what makes Amsterdam great.

Wijnands is but one of dozens of successful entrepreneurs I’ll talk with at TNW Europe this week – but not over rijsttafel, which puts Wijnands in the rare position of having my complete and undivided attention, at least between bites.

Who is Jochem Wijnands?

Wijnands is a Dutch entrepreneur that might be best known for PRSS — an iPad platform that spurred from a desire to create makeshift magazines. These magazines allowed for some visually stunning additions that are unique to digital and can’t be replicated in print, such as multi-layered images, video, and sound.

PRSS launched three years ago at The Next Web’s conference in New York City.

Shortly after, the company — with Wijnands at the head — realized there was a real tech deficit between their version and what was actually achievable on the early iPad (using existing solutions). Wijnands and his team sought out to erase this deficit by creating their own solution that could better utilize the iPad’s capabilities while cramming rich media into a magazine interface the world had yet to see, to this point.

There was nothing that matched our vision, so we created our own. Sometimes what you need doesn’t exist, so you have to build it. So we did.

This was the decision that completely changed the game, at least for Wijnands. Once a vision for a better magazine, PRSS was now a full-blown software company set on better defining what’s possible on the iPad. Apple took notice.

Ultimately, Wijnands and co. were acquired and came to work for Apple in creating what’s now known as Apple News.

But, back to lunch. Today, none of this matters. We’re instead talking about Wijnands new startup — or the reboot of his old startup — TRVL, which spurred the creation of PRSS. Wijnands had to pivot a bit as he’s presumably not allowed to shift into the software space again, at least for the near future. Instead, TRVL is a B2C, or perhaps more accurately a C2C company that aims to make waves in the travel space.

The new application, expected to launch later this year has a strong focus on ease of use, TRVL aims to reduce the “paradox of choice” as TRVL Head of Product, Alex Keynes puts it.

“More choices doesn’t equal better results. The paradox of choice is real, and TRVL hopes to make it go away.”

Trip planning is often a mix of searching for accommodations, flights, attractions, and other recommendations. It’s time-consuming, and takes the fun out of traveling.

TRVL hopes to fix that by providing less choice, not more. Of course, Wijnands and the team aren’t reducing choices for consumers just to make it easier, they hope to curate the best results and eliminate the rest through a team of amateur agents — essentially locals who are experts in the area. These agents can provide their recommendations to friends, family members, or complete strangers through Wijnands’ new app when it releases later this year. The recommendations are hand-selected, and pushed directly from agent to client based on any number of factors.

But, this isn’t sorting a screen full of options a la Booking.com. Instead, the agent picks several selections based on what they believe (or know) is important to the client: distance from the work event, nearby attractions, price. It’s all up to the agent and what they deem to be important to the user — an idea that faded long ago as brick-and-mortar travel agencies started to appear dated.

Fuck it, we’ll do it live

I take another bite of rice and ask, half-jokingly, if Wijnands will repeat history and announce the new chapter of his application during his time on stage with TNW co-founder Boris Veldhuijzen van Zanten.

He laughs and dismisses the idea. He tells me that the app is “ready” but also “not ready,” basically circling around to the idea that it works, but he’s not happy with some of the design choices and wants to tighten up a few elements before opening its closed beta to new users, or launching publicly.

Wijnands also said he’s honestly not all that sure what he’s going to be talking about on stage with Boris. I asked Boris and was met with another non-answer. Instead, I got his trademark grin, a shrug and a quick assurance “it’ll be a good talk.”

Regardless of what happens, Wijnands is a legitimate success story and a great example for other entrepreneurs using TNW Europe as a chance to connect, exhibit, and launch products and companies that we could be hearing about for years to come.

Read next: 8 popular sites blocked by ISPs in UK as MPAA continues with its whack-a-pirate game