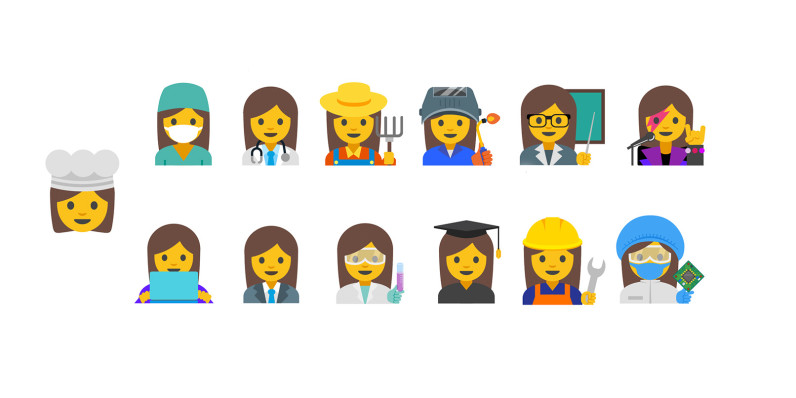 Fire up any messaging app and take a look at the emoji available for you to use, and you’ll notice there are hardly symbols showing women on the job.

In an effort to better represent women in today’s digital conversations, Google has come up with 13 new emoji depicting them in various lines of work, such as healthcare, technology and agriculture. They’re included in a proposal (PDF) to the Unicode Consortium, which is responsible for standardizing emoji worldwide.

The four-member team behind the propsal didn’t just choose these job categories willy-nilly: they explained that they weighed multiple factors, including their contribution to the global GDP and job growth data:

To make our final selection, we looked at the primary, secondary, and tertiary categories that compose global GDP — Agriculture, Industry and Services — and further broke them down categorically based on global popularity, growth, and overall representation. We additionally added in concepts from popular media campaigns such as #likeagirl, global influencers, and the ongoing support to promote women in STEM.

The group also pointed out that young women are the heaviest users of emoji and are more likely to use emoji at work while communicating with peers.

It’s also worth noting that the proposal includes representation of male counterparts in these professions and also encourages other Unicode members to help “create a system of emoji design that can accommodate a broader gender spectrum.”

With any luck, Google’s idea could become reality by the time the consortium readies the next set of emoji for apps and services across the globe – even if the designs don’t exactly conform to the ones the company has presented today.