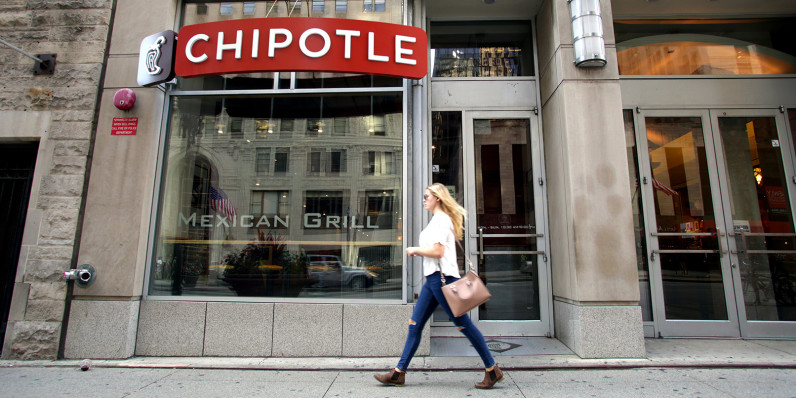 Two weeks ago, Foursquare CEO Jeff Glueck took to Medium to share how his company analyzed foot traffic patterns at more than 1,900 Chipotle locations across the US locations in February, using data collected by its app that lets people check-in to places they’ve been. It then compared them to the previous year.

The idea behind the study was to predict if Chipotle’s sales would take a nosedive after reports of E.Coli outbreaks associated with the chain first surfaced in October 2015. Foursquare began looking at data in February, when Centers for Disease Control and Prevention (CDC) gave it a clean bill of health.

To figure out how badly sales would be affected in the first quarter of 2016, Foursquare took into account Chipotle’s weekly sales for the first 10 weeks of Q1, foot traffic data from its app and a few other factors. The clip below shows what foot traffic looks like at a Chipotle outlet in downtown Portland, Oregon.

It predicted that Chipotle wrapped up Q1 with same-store sales down by roughly 30 percent year-over-year.

Today, Chipotle has announced its Q1 2016 earnings, and as it turns out, Foursquare’s guess was bang on target – the chain saw a 30 percent drop in sales, marking its first-ever quarterly loss in history.

This isn’t the first time Foursquare has used data from its app, which it says is used by more than 50 million people monthly at over 85 million locations, to predict sales. Last September, it projected that Apple would sell 13-15 million iPhones over the weekend when the new 6s and 6s Plus launched – and it was right.

Of course, these predictions aren’t just intended to help Glueck score some love on Medium – Foursquare has been selling this kind of data for some time now through its Place Insights arm. Today’s news proves that it’s indeed in the right business with a valuable product.

Read next: Windows 10 might soon get one of OS X's best features