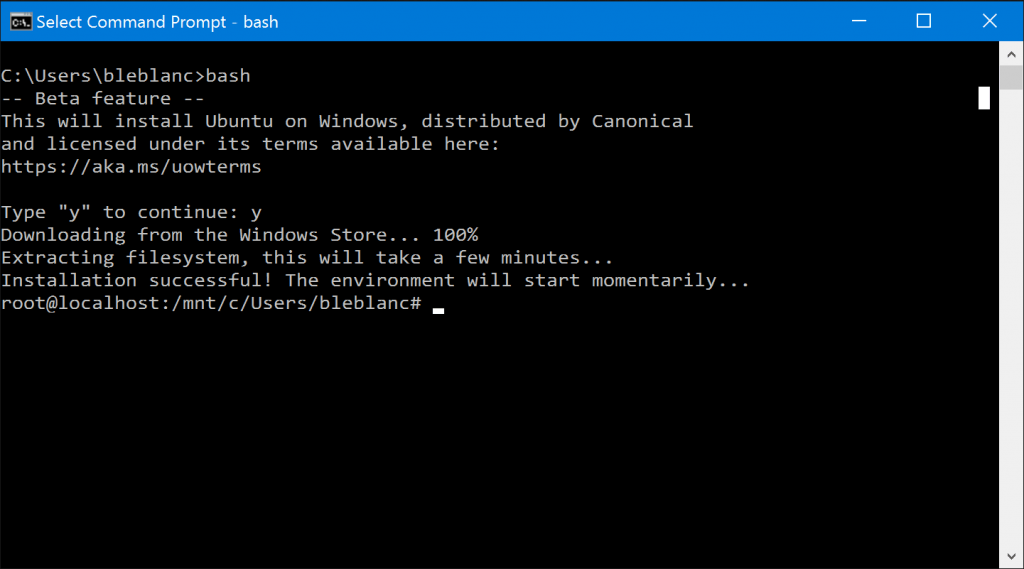 Microsoft’s first big update to Windows 10 was the biggest news to come out of its Build event last week. Now it’s finally ready to be tested by the public – Microsoft has released the first preview for the Windows 10 Anniversary Update to its Insider beta-testing program.

There are a ton of features coming in the Anniversary Update, for which you should read our roundup of announcements from Build. Though this preview doesn’t include all of them, there are several worth mentioning.

Most notable for the developers out there is the ability to run native Bash from Ubuntu right on Windows. Yes, that means Windows finally has a real Unix terminal – what a time to be alive.

There’s also improved cross-platform support for Cortana, such as a ‘find my phone’ feature, low battery notifications, and map sharing across devices.

Windows is getting a bit of a fresh coat of paint too, thanks to a completely revamped set of emoji, which also finally include multiple skin tones.

You can also now apply theme colors only to an app’s title bar (as opposed to coloring in the start menu and taskbar as well), giving you a little more flexibility.

Another welcome feature aesthetic feature: a dark theme, at long last satisfying those of use with gloomier aesthetic sensibilities. Microsoft does warn, however, that not all apps will respond to the color change – in particular those that aren’t tied to Windows’ theme settings.

If you’ve grown used to Windows 10’s Virtual Desktop feature, it’s getting a small but useful new feature: you can now pin windows to every desktop.

That means that you can have app appear consistently throughout various desktops, which is useful if you need to constantly monitor a feed, or simply need want to always have access to your music controls or a chat window.

It’s also nifty for those with multi-monitor setups, as it means you can keep a window on a second display even if you switch between virtual desktops.

Another feature power-users will appreciate is the improved Action Center management. Rather than just being an endless feed of chronological notifications, the Action Center will now default to only show 3 notifications per app at a time, with the rest visible from a collapsible menu.

You can also now set per-app priority levels, meaning you can filter out less important notifications from alerting you while you’re working.

You’ll need to be part of the Windows Insider Program and make sure you’re set to the Fast update ring to download the preview. As always, exercise caution; Insider Builds are meant for advanced users only, especially those in the Fast ring.

That said, this preview won’t include all of the features introduced at Build – Windows Ink is a notable omission, given it was exhibited as the biggest part of the update. For more on what’s available on this preview, check the source link below.

Read next: Slack made you lazy, and now it's got a Taco Bell bot to make you fat