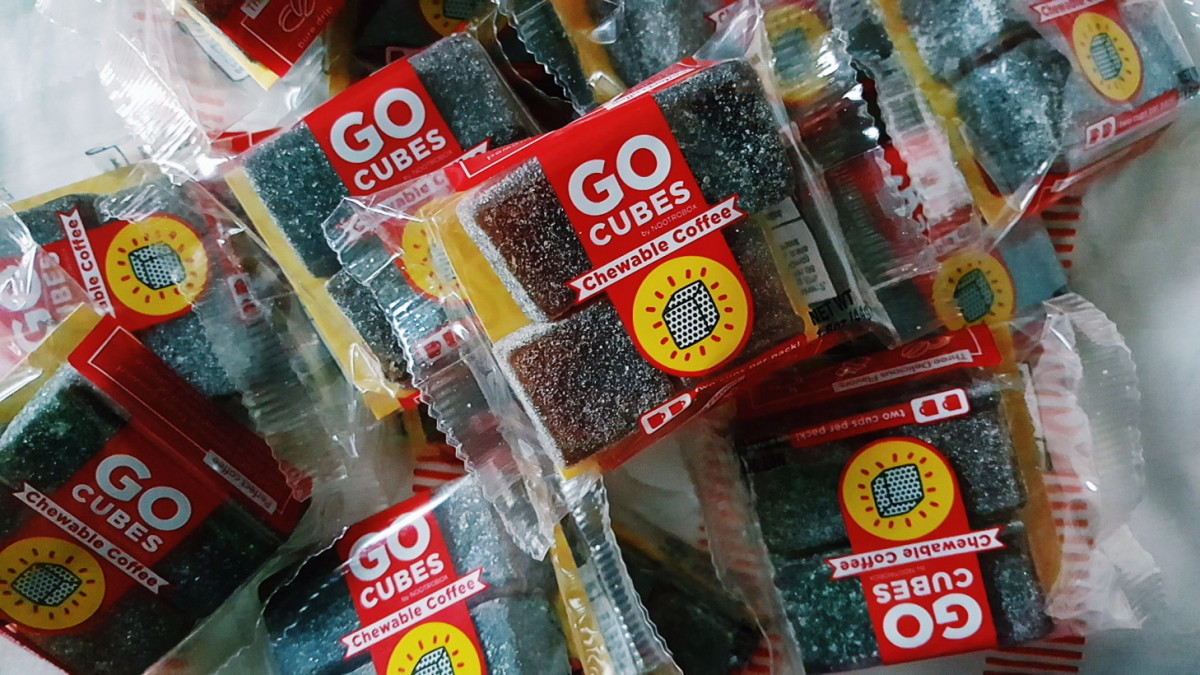 A lot of tech/science/innovative concepts come through TNW’s doors on the daily – some of them make it to consumers’ hands, others get killed for their own good. Nootrobox’s Go Cubes chewable coffee persevered.

Go Cubes emerged last summer as an Indiegogo project to bring gummy coffee cubes to your mouths because coffee is expensive, inconvenient, and well, too goddamn wet, evidently. Seven months later, these Go Cubes landed at West Coast Reporter Nate Swanner and my desks, so it was only fair we gave them a shot.

Go Cubes come in a set of individual packets, each containing four coffee cubes. The label says each packet amounts to two cups of coffee, or 50mg of caffeine per cube.

The packets also say there are three flavors per pack, though with four cubes, it’s hard to tell which flavor has an extra cube. Different shades of caramel brown are supposed to tell the flavors apart from pure drip, mocha, and latte – but to me, they all sort of look the same.

Texturally, the cubes feel like your average sour cola bottle gummies – but obviously thicker. They smell sort of like coffee too, but much more faint.

If you’ve ever had a Haribo gummy, this is basically what the texture is like in the mouth, but the taste is nothing like I’ve ever tried. It starts with sweet and oddly sour notes, but after a couple of chews the taste instantly turned bitter. Nate agrees on the sweet and bitter front, but did not pick up on the sour flavors.

Though the cube is covered in crystallized sugar, you don’t taste much of it after it dissolves. The caffeine and bitter coffee tastes overwhelm the sweetness quickly, and while it’s not unpleasant, I also wouldn’t describe it as delicious.

The bitter aftertaste gets stronger as more time passes and lingers on the tongue, and 30 minutes later, the cube’s effects took place. I began feeling jittery and wired, and a bit all over the place. It was nice to feel a boost of energy at 4 PM, but it also became difficult to focus. My thoughts were erratic, and even my coworkers commented that I was starting to sound insane.

Side note: At this point, I took a 15 minute break from the story to play my new favorite song on Spotify, belted it aloud for three repeats, then returned to WordPress.

After realizing I’d prefer something sweeter and creamier given the candy nature of the cubes, I gave the latte flavor a go despite already feeling caffeinated. To my disappointment, it tasted the same as the pure drip or mocha one I had an hour prior. I wish they had a more chocolate-y flavor, but I understand Nootrobox’s desire to keep sugar count on the lower end (two cubes will earn you 12g of sugar.)

Are you sure this is coffee, not cocaine?

It should go without saying that I’ve never tried any form of brain stimulant recreationally, but I assume this ultra high energy feeling might be similar to what you get from the prescribed stuff.

The caffeine effect appeared to hit Nate about an hour after we ate the cubes. It’s probably more accurate to describe it as espresso or Red Bull in a cube than coffee. Go Cubes even share some of the core active ingredients with most energy drinks, including glucuronolactone, folic acid, and Vitamin B6.

Starting at $23 for six four-cube packets, or about a dollar a cube, they’re pretty reasonable for an energy boost – if you like your nutrients in candy form (looking at you, adult gummy vitamin users). But no way are they replacing real coffee from your favorite caffeine establishment. After all, coffee is more than just an energy booster, people like them because there are many flavor varieties, the roasted aroma is wonderful, and on cold days, they’re perfect as drinkable hand warmers.

But if you’re looking to keep the party going all night, Go Cubes are a great way to get lit without having to sneak a meet up with your dealer. Word of warning: Don’t let your kids near this stuff.

Read next: YouTube co-founder launches a livestreaming platform for foodies