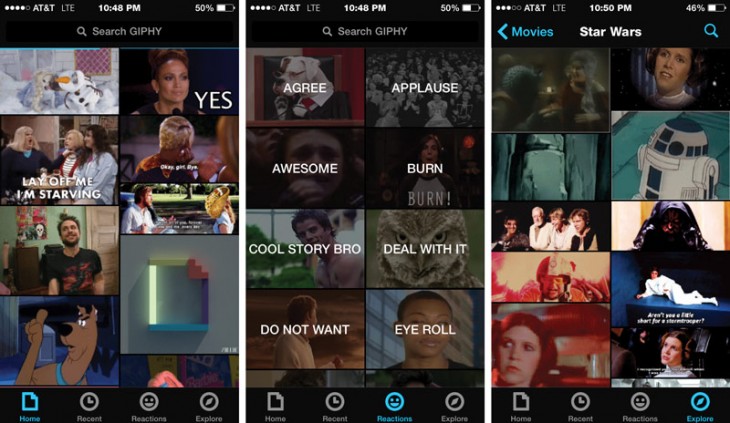 Giphy is un-hitching its wagon from Facebook Messenger with the release of its 2.0 iOS app.

The functionality within the mobile application is essentially the same as you would find on Giphy’s Web version, which is honestly what most of us expected after it announced its latest round of funding ($17 million) as well as the acquisition of Nutmeg, the GIF messaging app.

What we didn’t expect back in March was for Giphy to build its first app on the back of another platform, Facebook Messenger. Giphy + Messenger allowed Facebook users to tap into the immense library of animated GIF images, but solely for the purpose of using them on Facebook.

2.0 changes all that and features a sort of branding about-face.

It’s great to see Giphy continue to grow individually from Facebook and Twitter. GIFs are all but meaningless if they’re not shared, but with Facebook turning to a combination approach featuring both Giphy and Riffsy for GIF delivery on the desktop, it made sense for Giphy to move in its own beat as well.

Afterall, the Giphy API already gives services – like Slack, for example – access to its library of animated images, so moving toward allowing access to the library rather than having it operate completely dependent on a third-party platform makes a lot of sense.

Building a mobile application of this size on the back of a third-party platform is riskier than going at it alone. Just ask the developers that relied on Twitter before seeing them cut access to the API.