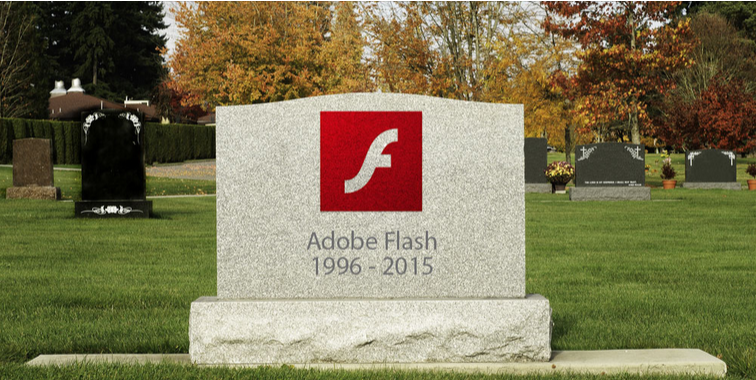 I first started playing with Flash in the late 1990s when Macromedia Flash 3 was the latest version. My original website is still live at treecity.co.uk

Over the years, Flash has always taken a beating, especially when Flash intros became so popular and even more so when Flash banner ads annoyed people more than almost any other Web gimmick ever created.

Forums and communities, for what seems like forever, said Flash was dying, was dead, needed to die, was hated etc but the reality of Flash was much more positive than what the tiny minority with the big voices had to say.

In one sentence… Flash was the pioneering software that revolutionised Web design from the late 1990s for an entire decade and more.

In December 1997, the web transformed into this:

In 1998 Flash intros really gained pace, with the likes of Balthaser creating one of the most well-known in its day. Creator, Neil Balthaser was pretty much just playing with Flash and building his Flash skills but his new website garnered huge attention and lead to ABC News World interviewing him and he, subsequently, had work offers from Fortune 500 companies who were calling him at home.

In 1998, personalities started to shine through…

NRG.BE — The voice, one of Peter NRG’s friends, Michel Orthier of Breakout4u.com who was a professional voice-over artist at the time, would become almost legendary in its own right, later going on to feature on sites like MegaCar.com and Kimble.org (both sites of Kim Dotcom).

In 1999 internet connection speeds were beginning to gain pace, something that was going to be essential and always an issue for heavyweight sites utilising Flash. 33.6 K modems were fast being replaced by 56 K ones, almost double the speed.

However, Flash sites, even though they were often optimised to perfection, were boasting site introductions and very soon the term “skip intro” would become a household name. In later years we’d even see this name be used by a Dutch agency as their agency name.

Neostream Interactive — An Australian based web agency had massive impact when they launched their own Flash website. The self-proclaimed “serious multimedia company” very quickly garnered a mass following of Flash enthusiasts from around the world and the very small teaser of a new website would have people checking back frequently.

These were the days when a lot of people trawled cool site forums and Flash showcase sites like The Flash Challenge and bestflashsites.de on the off chance that they’d find something new and could be the first to share it amongst their friends.

“About 99 percent of the time, the presence of Flash on a website constitutes a usability disease. Although there are rare occurrences of good Flash design (it even adds value on occasion), the use of Flash typically lowers usability. In most cases, we would be better off if these multimedia objects were removed.”

However, this could not stop the charge and the likes of Joshua Davis continued to innovate with navigation through Barneys New York and new agencies like Hi-ReS! were setting the bar for movie websites with Requiem for a Dream

In 2001 we saw the year of one of the most influential and copied Flash sites ever created, 2Advanced Studios — v3 Expansions. Creative visionary and former Design Insites’ Eric Jordan, had already captured attention and gained a following with his company known to the Flash community often as 2A. These were the heady days of Forums like Flashkit, where passions would run high (see a 52 page thread here).

In 2001 we’d also see many world’s firsts for website design:

In 2002, we’d see more firsts, thanks to the power of Flash and the creativity of a number of individuals:

dontclick.it — the first ever website where you couldn’t click
Wedding Crashers Crash This Trailer — the original upload your face
Dream Kitchens for everyone — the original Matrix style video effect on the web
Comcastic — the first site to incorporate a mobile phone
YouTube — yes, Flash gave us YouTube in 2005.

VERMEERSCH — the first actual person site
Barcinski & Jeanjean — one of the first 3D (glasses) websites
Hotel 626 — the first site to open after dark.

John Galliano — the first site to allow a search within a video.
Andreas Lutz — Clicking is so 90s! — the first time you could navigate using your voice
The Prototype Experience — one of the first Facebook connect sites

Who’s We Studios — attitude in 2002
tokyoplastic — outrageous creativity in 2003
Samorost — Flash games from individuals in 2003
Vodafone Future Vision — A vision of the future in 2004
Toyota AYGO — A car through a letterbox in 2005
Philips Bodygroom — another inch in 2006
Flash Earth — The entire planet in 2006
monoface — 759,375 possible face combinations in 2007
Get The Glass — incredible production and interactivity in 2007
The Outbreak — interactive horror in 2008
We Choose the Moon — the chance to relive the first Moon landing.

A HUGE COMMUNITY — Flash gave the Web what could almost be described as a religion, the community bond was that strong.

2010 was the biggest year for Flash, as in the worst. With the launch of the iPad and the growing popularity of the iPhone (with no Flash support) and, the final nail coming with Steve Jobs’ (R.I.P.) Thoughts on Flash in April 2010, the aftershock was of epic proportions. Almost overnight, Flash became the darkness of the web and was shunned widely.

Many thought that Adobe fell well short responding to the impending fate of Flash and some industry players expressed their thoughts via an article, The Industry — Thoughts on Flash.

The reality though was that Flash was still being widely used by big agencies and big brands and it would be many years before we’d see Flash fade away from websites.

In 2011 Storming Juno threw you onto Juno Beach, Normandy, on D-Day with an impressive 360-degree rotating view of the beach at that time. The atmosphere this site created was truly incredible. It was an absolute must-see experience.

2011 also gave us a glimpse of Jason Zada’s skills as a Director as he launched the creepy Facebook connect experience, Take This Lollipop, which went on to get over 15 million Likes and even scooped an Emmy award.

In 2012 the web belonged to a bear… Bear 71 and gave us a unique insight about the intersection of animals, humans and technology. This twenty minute documentary which would see you following the emotive and powerful story of Bear 71, a real bear that was tracked across parts of Canada by The National Film Board of Canada.

In 2012 we’d also see how Flash was growing out of the browser as well, via installations like PONK. This experimental game installation combined a touch-less game play device and reactive objects.

In 2013 we saw projects like Lifesaver, an interactive film where you could pretty much learn how to save someone from a heart attack.

And even right up to the current day… in July 2015 we were still blessed with more amazing Flash work with the crazy Old Spice Muscle Surprise. In fact, you had to wonder… was Flash even becoming retro?!

I think we can all safely agree that Flash’s days as a powerhouse in Web design were dated as of April 2010. As of September 2015, it is extremely rare to see a website made in Flash. The Web has evolved and we are now at the point of moving forward without the need for a plug-in and we are finally seeing creative work that has taken the gauntlet from Flash.

Whilst Flash remains a powerful piece of software and is used extensively in authoring, the .swf extension on the Web is almost extinct.

I’m certainly not trying to save Flash websites from extinction, we have all moved on but I had to write this piece after seeing way too many hateful link-baiting articles (yes, check out my link-baiting article title too!), with sweeping statements about Flash from “journalists” who possibly never used Flash and were never even privy to the greatness it brought to the web and an entire generation.

Read Next: Adobe Flash is terrible, here’s how to uninstall it forever