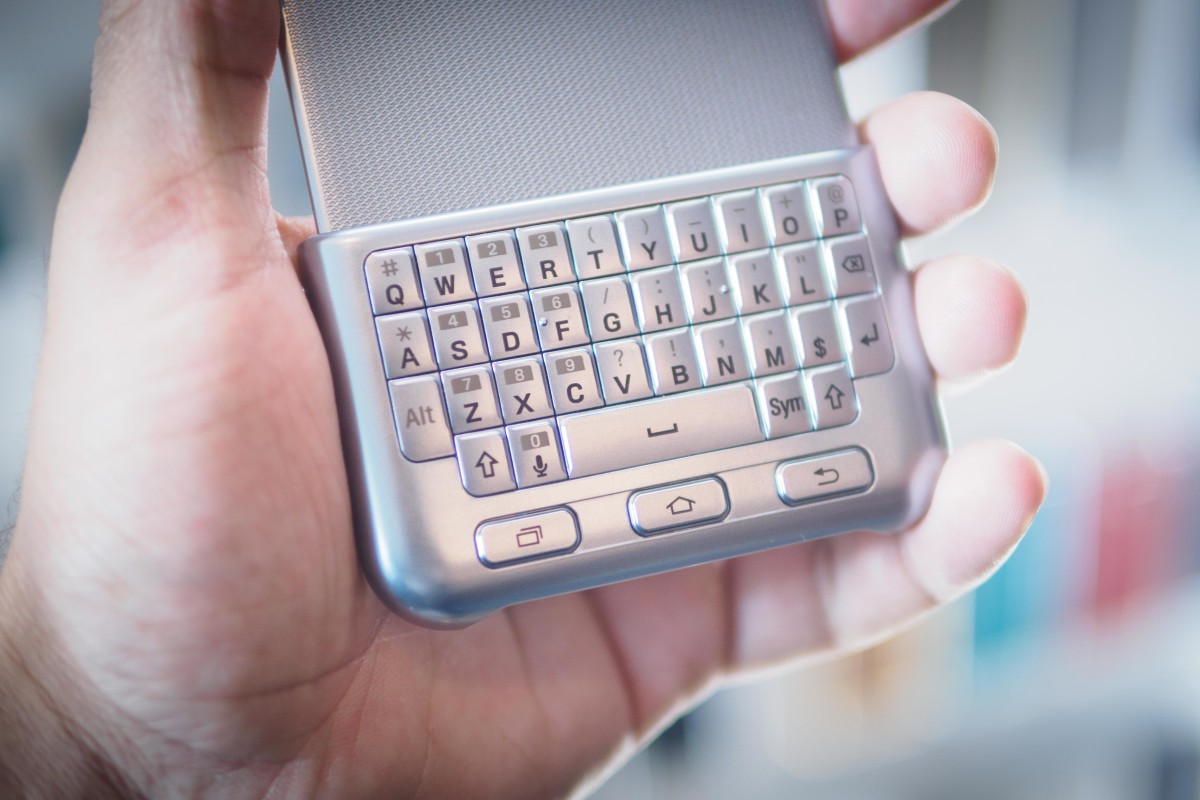 We all knew the Samsung Galaxy Note 5 and S6 Edge+ were coming, but the company surprised (and maybe confused) us all when it announced a snap-on keyboard for the latest models of the Galaxy S and Note phones.

It’s a bit reminiscent of what Ryan Seacrest tried (and overwhelmingly failed) to do with Typo for the iPhone. We look a closer look at the accessory at today’s Unpacked event in NYC.

The keyboard feels a little more plasticky than the brushed metal used on the Galaxy S6, which cheapens the quality a bit. To enable the keyboard, just snap it right at the bottom half of the phone and the screen will automatically crop to the top edge of the keyboard. The device recognizes what you’re typing using touch capacitive technology, so no batteries are required.

With the keyboard on, it doubles as a case to provide extra protection to the lower half of the device, which is helpful for S6 Edge or Edge+ users. When the keyboard is not in use, you can move this to the back of the device for the full screen real estate.

The accessory adds about a quarter inch of thickness to your phone, which doesn’t feel ideal if you carry your device in a pants pocket. For those who carry extra accessories, such as external battery or hard drives, this will be easy to throw in with the rest of your gears.

The keyboard comes in the same colors offered with the S6 and Note 5 lines (gold, silver, black, navy) so you can match properly.

I admit that sometimes I do miss my QWERTY keyboard from the BlackBerry era, but it wasn’t until I started using the Samsung keyboard add-on that I realized how much faster I type via touchscreen.

The Samsung keyboard is on the thicker end, which requires a hard press to register each key. This slowed my typing speed down significantly, and caused a few typing errors as I moved on to the next letter before the last one finished registering.

Despite its size, I also found the keys a bit too close together. Every other letter I typed ended up with me pressing two keys simultaneously, which meant I got both letters or none at all.

With the keyboard on, you also miss out on the emoji shortcut. If Samsung created this accessory to please BlackBerry users, then it’s on point for enterprise users – but for everyone else, this seems like an unfortunate oversight.

There’s a lot of work Samsung could do to finalize the design of this keyboard before releasing it. With a planned launched date of “a few weeks” after August 21 – the day the S6 Edge+ and Note 5 hit US and Canada markets – it doesn’t have a lot of time for revision, however.

The keyboard is expected to cost $80, and will arrive for the S6, S6 Edge, S6 Edge+ and Note 5. It’s a high price to pay for nostalgia, and I’m not entirely convinced we need it. Not this one, anyway.

Read next: This app automatically picks you up in an Uber and takes you to a mystery bar