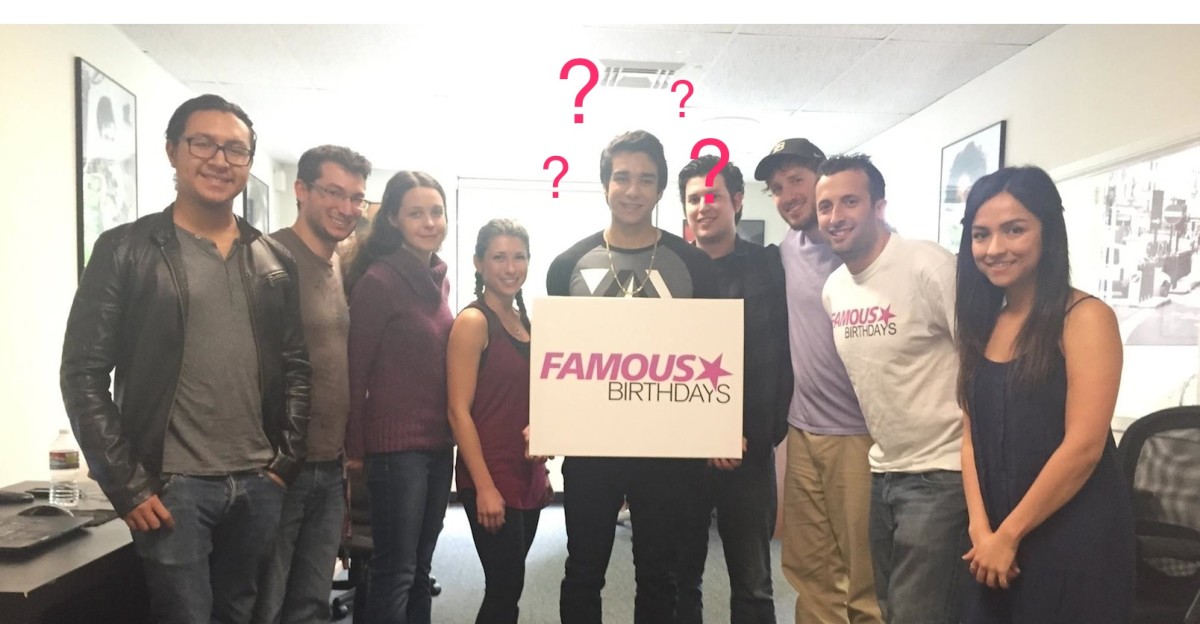 If you only read the mainstream press, you might think that Kim Kardashian – married to Kanye West and never out of the MailOnline’s ‘Sidebar of Shame’ – is the most famous of the brood.

However, Jenner’s fame pales in comparison to the interest drawn by YouTubers, Viners and Instagram stars, whose highly-engaged fanbases follow their every move.

Rainy days make me want to cuddle and watch movies 🙈

If you’re not a teenage girl, it’s likely you’re at best dimly aware of Nash Grier (4.6 million Twitter followers) or Cameron Dallas (4.8 million followers), but a site that’s also unlikely to be on your radar is turning their fanatical followings to its advantage.

I'm always looking at things so much differently than everyone else

When Famous Birthdays launched in 2012, it focused on traditional celebrities like Tom Hanks and Kobe Bryant. It’s quite literally just pages detailing celebrities birthdays and facts about them.

Soon though, its founder Evan Britton noticed something:

We saw all these names popping up that we’d never heard of. At first, I thought it was people searching for themselves.

But then we realized: They were stars from YouTube, Vine and Instagram. And there’s enormous passion behind them.

So that’s what he seized upon, turning the site into a highly-optimised, rapidly updated source for fans seeking details about their favorite Web celebrities alongside details of celebrities you’d actually consider famous.

In May this year, Famous Birthdays racked up 7.2 million unique users, 41 percent of them returning visitors.

Britton and his team take an almost worryingly fanatical approach to optimizing the site’s search engine. He told me that they have taken account of over 400 misspellings of ‘Nicki Minaj’.

Search for a YouTuber’s nickname, username or birth name and you’ll find them. The same goes for the huge range of date formats used across the world – the site is designed to handle any of them.

That obsessively tweaked search engine is seeing upwards of 5 million searches a month, giving Famous Birthdays an incredible source of data on the ups and downs of fame – online and otherwise. Britton knows the stars on top, the ones rising through the ranks and who’s racing towards uncool.

When we identify an up-and-comer before the public, we contact them while they’re still approachable. We’re often the first business to contact them, even though they might have over 100,000 followers. A lot of the time they’ll tweet about being on Famous Birthdays.

http://t.co/wqfKAjYYM6 just contacted me to add me into their database. 😱

The company’s ‘shout outs’ page is a gallery of faces you won’t recognize, who have more followers than you or I will ever rack up on Twitter or anywhere else.

Evan Britton is 37. He doesn’t care about the teenage stars of YouTube and Vine any more than I do. But he cares about their followings – “It’s my job to serve our audience.” – and that they’re catnip for brands: “The reason we do well with advertisers is that we have a very niche appeal.”

Before he focused on ‘celebrity’ birthdays, he attempted to make a success of a wide range of special interest sites:

One was about railroads, one was about the Moon. Our company name was ResourceWebs. I wanted to build sites that were resources for people. I realized we weren’t growing and needed to pick one site and make it my baby.

It’s a strategy that seems to be working. Britton has a team of 12 based in Santa Monica. He’s now recruiting again.

Earlier this year, he took his people to Digitour, the live event that brings fans together with their favorite Viners and YouTubers. The aim was to help them understand the intensity of the fame that surrounds these young men and women who are still rarely household names:

I wanted to show them the excitement and that this fame is not only very resilient, but very deep too.

As many of you requested, I'm now on @FamousBirthdays http://t.co/VitMn9a3bm x

Spending so much time thinking about this new breed of celebrity has given Britton an interesting perspective on their appeal:

It’s about the connection they have with their fans. The ones that excel are first-movers. Some have a specific niche, others just have a personality that appeals to people. Their fans think of them as friends.

We’ve had a few of them in our office, either doing Periscope interviews or just coming in for their birthdays. What’s impressed me about them is that they’re smart and they’re humble.

A lot of people have tried to do what they have and failed; they’re savvy. They have good marketing minds and understand their viewers.

According to http://t.co/qJYyVjt1Sf, Bob Marley and I have the same birthday 😳

Of course, that’s what the founder of Famous Birthdays would say. It’s in his interest to talk up the young stars whose fame is the engine of his site’s success. But when I put that to him, he sticks to his guns. He swears he’s genuinely impressed by them.

The social secrets of fame

For anyone trying to understand what works and what doesn’t when it comes to social media, Famous Birthdays is an interesting case study. Displays on the wall in its office monitor its social traffic sources and Britton says that can be very revealing:

Reddit often blows up our traffic, particularly when a YouTuber does an AMA. Facebook is more consistent. Sometimes Twitter interest rockets. That’s usually when we get a shoutout from a YouTuber or Viner with a million followers of more. Then we’ll see a huge spike.

Famous Birthdays shows what celebrity means today and where its headed. Britton puts it concisely: “The cord-cutters don’t care about Hollywood icons.”

Andy Warhol promised we’d all be famous for fifteen minutes. Now, you’re lucky if you’re famous for 15,000 page views. Online fame is a numbers game and traditional stars are losing.