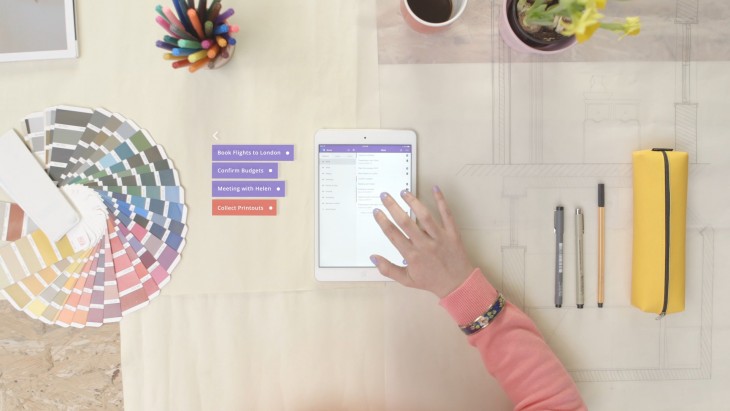 Task management app Todoist is getting a huge update today on iOS as the app hits version 10. There are a slew of new features in what Todoist is calling its “most comprehensive update ever”.

First up, an Intelligent Input feature allows you to type dates, labels and priorities directly into the task field – Todoist will automatically recognize the information you write to apply them to a new task, saving you time from having to fill in all the details separately.

Another time-saver, you can now add items by simply clicking on the new red circle in a task view or project. Alternatively, a new ‘pull’ gesture lets you add into the middle of a list; pull your fingers apart to separate two tasks and create a new one between them. And if you need to move stuff around, you can re-order or indent tasks and sub-projects using a longpress.

Tasks can now be marked as complete or rescheduled with a swipe. If you have many items to sort through however, you can now select multiple tasks to set as complete, change due dates, update priority, delegate to a new person or move to a new project.

Natural language recognition for voice commands has been improved as well. Todoist says if you create a task by saying “run a mile with Joseph every Thursday at 6am starting March 29th and ending October 12th,” the app will be able to understand what you mean and schedule a task accordingly.

The app is getting a bit more colorful too, as it’s added support for 10 themes with fancy colors including tangerine, sunflower and amethyst. It’s gained updated welcome and log-in screens, and some redesigned menus too.

It’s a significant update that could make creating and sorting through complex task lists a lot easier. While these features are hitting iOS users first, Todoist says it will soon roll out equivalent updates for its Web, Mac, Windows and Android apps. In fact, folks on Team Google have a complete Material Design overhaul to look forward to as well.

Read next: File-sharing service Infinit launches on iOS and Android, lets you send files to all your devices