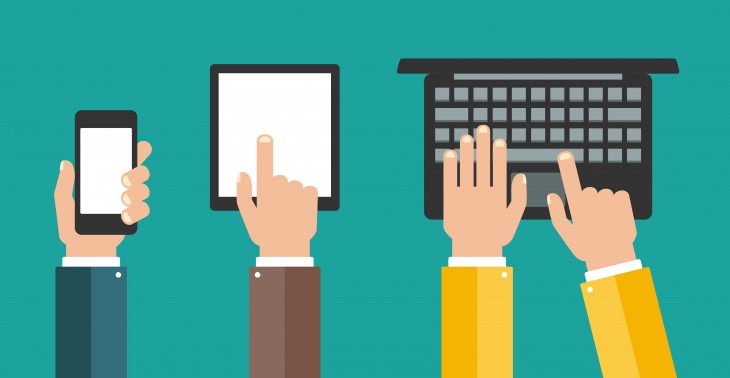 Pieter Walraven is the co-founder of Pie, a Singapore-based startup building messaging for work.

Typing: the final frontier. These are the voyages of mobile’s killer app, messaging. Its mission: to explore strange new ways of communicating, to seek out new workflows, and to boldly cannibalize one of the oldest input methods known to man, the keyboard.

Besides being subject of a high-stake platform war involving all major tech behemoths, messaging apps – used by billions every day and still growing in popularity – are gradually taking center stage in the accelerating shift away from typing.

But before diving into how this is happening lets look at some of the fundamentals behind this trend and why the workflows we’re so accustomed to will decay.

I hear you thinking: “I won’t ditching my keyboard any time soon. And didn’t both Apple and Microsoft just announce all-new keyboards? The keyboard ain’t goin’ nowhere!”

The problem is that people look at each tiny step and label the slow progress as evidence for non-change. It’s hard to grasp the change because of its slow incremental nature and because we’re right in the middle of it.

Of course the keyboard will not disappear overnight. The point is that it will happen gradually, but sooner than you would expect. Why? Because mobile is eating the world.

In 2011 the global annual sales of smartphones for the first time outnumbered PC shipments. It’s estimated that in 2017 there will be around 1.5 billion PCs globally. The number of smartphones is estimated to be around 4 to 5 billion by that time. This gap will only widen further as more and more people go mobile-first and mobile-only.

Mobile is eating the world

Mobile overtaking PC as the dominant platform has huge implications on the level of innovation for both. As mobile is where it’s at both startups and larger companies building new tools are now leaning towards mobile instead of PC. And it’s not only companies, also education has shifted towards the mobile world.

What has happened is the pace in mobile workflow technology innovation has overtaken that of the PC and will continue to accelerate while PC workflow innovation will eventually slow down.

Besides the gap in unit numbers there are other powerful fundamentals in play that further drive mobile workflow innovation. Benedict Evans, Partner at Andreessen Horowitz:

“It’s not just that you’ve got 3x more devices … the smartphone is completely frictionless, it has all these sensors, it has payments, it’s in your pocket everywhere, it goes with you all the time … and it will continue to gain all these capabilities. … So it’s more like 10x real value and opportunity.”

Evans calls this the “leverage effect” of smartphones caused by the transformational new things that you wouldn’t be able to do before.

With a better understanding of why PC-era interfaces will lose ground compared to mobile lets see how we’re actually doing so far. What are some innovations in mobile workflow technology and more specifically how is mobile’s killer app – messaging – eating your keyboard?

Emoji were originally created in Japan by Shigetaka Kurita in 1998 who at the time was working on i-mode for Docomo. Kurita realized that with mobile internet’s short form communication “You don’t know what’s in the writer’s head.” Emoji was the result of solving the communication breakdown caused by the shorter, more casual nature of mobile email and other forms of mobile communication.

Stickers are in essence an extension of emoji, helping us express ourselves with a single tap instead of a long string of characters. Both emoji and stickers help us communicate faster, easier and with more nuance helping us save time as we don’t have to type as much.

Voice messaging and dictation have been around for a while, but messaging apps have pushed their popularity to new heights. Both features are particularly popular among Chinese language users that use it to bypass the pain of inputting Chinese characters with a keyboard.

It’s no coincidence that voice messaging, emoji, and stickers were first popularized in Asia. For people using romanized Chinese – pinyin – or the Japanese rōmaji, typing is more painful than for us familiar with alphabetic languages. The tedious character-select input or worse, having to draw each individual stroke with a stylus, has pushed the market to come up with better workflows.

Your phone knows where you are, what you’re saying, who you’re with, and how fast you’re moving.

We’ve entered an era of self-aware devices able to predict and assist us in every move. With the Internet of Things and not-so-unlikely event of smartwatches becoming mainstream the self-awareness of our devices is expected to drastically increase in the coming years.

“For enterprise, the value of the sensor is in being a shortcut for the user interface, potentially even replacing typing so we can concentrate on the easy, fun, creative things.”

With communication living at the center of everything we do, messaging is playing a pivotal role in driving interface innovation through sensorification.

Sensors can be used for what Weiss describes as “shortcuts” to communicate easier and get devices to serve relevant quick actions or even automatically perform them based on your status.

A practical example is what we’re currently working on at Pie, a chat for work app (disclosure: I’m a co-founder). By tracking your status Pie is able to predict what you want to say and provides a list of optional smart message recommendations that can be sent with a single tap or swipe.

Messaging and NLP are a great fit as messaging’s short form content makes it relatively easy to process and analyse compared to for example email. Google Hangouts and several other major players in the space are taking this approach to help you type less.

“We use machine learning and natural language processing to give an assist.”

Hangout’s “assists” were inspired by Emu, a messaging app that Google acquired last year. Among other things, Emu had a virtual assistant similar to Siri listening in the background, scanning and understanding conversations to help you take the right action when you need it.

In January this year also Facebook claimed a seat in the smart messaging race with the acquisition of Wit.ai. The company offers developers a Siri-like virtual assistant that translates voice or text into structured data.

In Comes The Smartwatch

Like every new platform the existing way of doing things is applied first. Similar to what email was for the smartphone in it’s early days – until we find something else – the killer app for the smartwatch will be messaging.

The challenge is that compared to mobile a watch has even less screen real estate. It’s this limitation that imposes innovation on the platform. The tiny screen will be a strong catalyst in pushing new type of interactions as for efficient messaging it has to rely on sensors, NLP, and AI.

This is what Kevin Lynch demonstrated in September last year, when he demoed Apple Messages on the Apple Watch. Like Google Hangouts also Messages analyses your conversations and gives you a list of smart replies to tap. Apple refers to this feature as “Quick Board”.

Apple Messages – Demo of “Quick Board” on Apple Watch

Besides a list of smart text responses Messages also offers dictation to text, voice messaging, and emoji. Unsurprisingly, a keyboard for ants is nowhere in sight.

With messaging apps as an important ingredient a combination of different market fundamentals and trends is changing the way we’re interacting with our devices. After almost 150 years finally the time has come for text input to catch up with modern times and to say goodbye to the keyboard.

Though the PC still has a large ecosystem the innovation in it’s workflow technology will slowly perish, especially compared to what’s happening on mobile. At the same time similar to how the graphical interface reinvented how we work our workflows will incrementally align with what’s possible with the new tools available.

Ditching the keyboard will not be instant and we’re only at the verge, but replacing it with better interfaces will allow us to communicate with the rest of the world in a much more efficient and natural way. This is incredibly exciting as higher quality workflows not only help us be more productive and save time – they most certainly will – but in the end they’ll allow us to better understand each other.

Read Next: Transform your Mac keyboard into a universe of emoji, because why not?

Read next: The SKEYE Nano Drone is back in stock! 41% off at TNW Deals