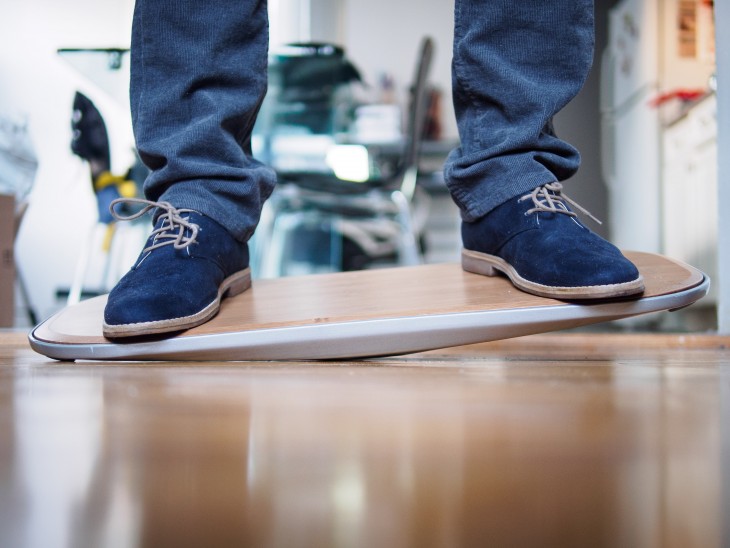 Sitting all day sucks. Besides plenty of research on its negative health effects, extended sitting just makes it easier to lull off when you should be doing work, which is good for neither you nor your workplace.

Naturally then, standing desks are popping up in offices everywhere. But while being upright offers a slight metabolic advantage over sitting, its overall benefits are still up for debate. Some researchers argue that being encouraged to move around more is the key, rather than the simple act of standing.

Movement is just what Fluidstance’s Level brings to the table. Or desk.

Describing the Level is tricky, because at its core it sounds like a recipe for disaster: it’s a balance board for people using standing desks. Still, it’s managed to amass $270,000 on Indiegogo (from an original goal of $40,000) with a few days still left in the campaign, so some people clearly liked the zany idea.

Thankfully, it turns out to be a lot better in practice too.

The Level is designed to increase your standing range of motion to something more akin to walking. This movement happens in three dimensions and the company claims it results in a 15 percent increase in heart rate compared to sitting (an extra 12.2 beats per minute, on average).

The hardware itself is simple, but well-made, and essentially consists of a wooden deck with a sculpted metal base on its underside. It has small rubber feet at the corners to keep you from flying off when moving around too much.

The two cheaper models are designed for folks under 250 pounds (the top end model is good up to 350lb, for you bodybuilders out there). I weighed in at a hefty 210 pounds when I received mine about a month ago, and the wood has never so much as creaked.

The Level feels like it will last for years, but if you ever have an issue, the top deck, base plates and rubber feet are all replaceable.

The whole fit and finish make for an elegant piece of hardware. Once you get used to having one around in the first place, it actually looks kind of nice in front of your desk, in a futuristic sort of way. The way it balances itself, it’s almost like a really classy hoverboard, which is pretty cool in my book.

I’m not going to lie; my first few days with the Level, I spent  a fair amount of time trying to break my record for how long I could spin around in one go. I received funny looks. Granted, I’m the type to do the equivalent with an office chair.

As you might expect, it’s a little bit awkward to start; you’re standing on a moving platform when you’re used to working in a stationary position. On the Level, your first instinct is to spin around a bit using your hips. That initial step is a little jarring, but also fun, and I never felt at risk of falling off.

Don’t confuse it with the balance boards you’ll find at a gym either; the Level doesn’t purposefully make you struggle to stay upright, and it’s not a training tool. Rather, it flows with your own movements, and you’re always in command.

I made my transition to a standing desk a couple of months before trying out the Level. I quickly preferred standing as it helped me remain more alert throughout the day and keep a straight spine, but it’s not free of its own issues. Instead of the occasional back pain I’d have with sitting, after several hours of standing, my knees or hips would feel slightly tight or locked up.

I have good posture, and my screen and keyboard are set to the right heights, but sometimes I’d want to take a break and just work from my chair.

That never happened to me with the Level. Because you’re forced to constantly move, even if only slightly, your joints and muscles spend less time under the sustained tension of singular positions. And while I can’t test the company’s heart rate claims, I don’t find them suspect – moving around will obviously yield more physical exertion than staying in one spot.

Perhaps the best thing I can say about the Level is that after a few days, you sort of forget it’s there. Sure, you’re constantly moving, and you’ll still want to give it that occasional spin, but you’re not thinking about it. Fluidstance says typing speed wasn’t affected in test users, and I noticed no difference in my own.

If anything, I felt more attentive throughout the day than I would when just standing, and rarely experienced that oh-so-common sense of sleepiness halfway through the work day I would when sitting.

I tried working without the Level – both sitting and standing – a few times after getting used to it, but kept going back. It’s not just the novelty factor either; I wanted to give it a shot as a long-term tool, so I used the Level for over a month.

One small caveat; I mostly stood on a hard floor, and the constant movement around one point meant the Level tended to accumulate dirt on the ground under it. Fluidstance recommends using it on a thin mat if you’re not on a carpet, but it’s nothing you can’t quickly clean.

Price, unfortunately, could be the rub: the Level starts at $269 for the cheapest model, and costs $389 for the high-end handmade edition. That’s going to seem like way too much to some people, and hopefully the price will eventually come down. But also consider many people spend hundreds of dollars on ergonomic office chairs that may be less helpful than just standing up and moving around every now and then.

Using the Level is more active than both sitting and standing, but importantly, doesn’t mess with your workflow. Sure, you’ll still get some funny looks, but considering the average person spends eight hours a day sitting, the one-time investment could certainly be worth it to add some movement to your life.

Besides, it’s just kind of  fun.

Read next: Samsung's Milk Music service is now available to everyone via a browser