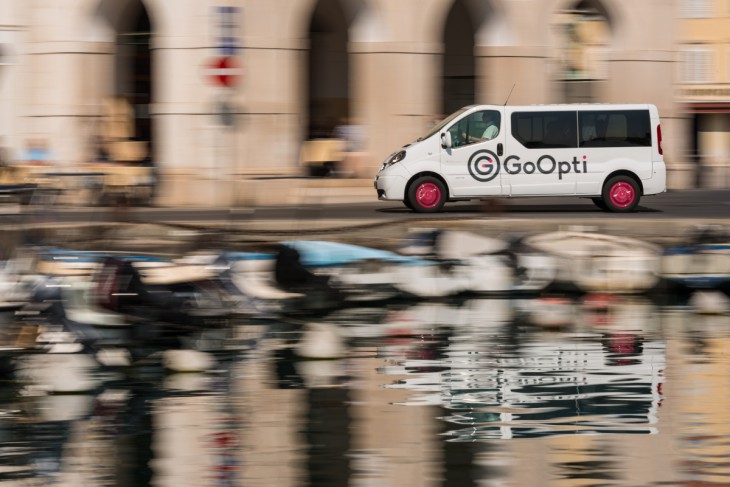 If you live in San Francisco, New York or London, you must think that the transportation industry is undergoing rapid disruption with Uber, Lyft and others leading the way. However, a few hundred miles from big cities the situation can change rapidly. That’s certainly the case in mainland Europe.

Talking about this state of affairs, Marko Gucek, who co-founded an airport shuttle startup GoOpti in Slovenia, said that “we’ve learned this is a really complex industry run by mafia.”

If public transportation within the cities’ boundaries can be characterized as decent or even sometimes good, longer-distance travels with no regular routes established are still mostly covered by old-style players owning a few vehicles and doing all the dispatching work manually.

“Usually they’re not reliable, they can cancel a trip if there’s not enough people,” Gucek said.

Gucek’s startup was launched in Slovenian capital, Ljubljana, in 2011. Since 2008 he has also run a successful travel agency together with his partner.

“Our main focus was lowering the cost of business travel,” Gucek told The Next Web. “We noticed that most flights from Ljubljana airport were expensive and not so convenient, so we said, why not start offering flights from other airports like Zagreb, Trieste or Venice? They’re all in a one to three hours drive away.”

The idea received a good response from clients, but a new problem arose as many of them started asking how to get to these other airports in the most convenient and cost-efficient way. That was where Gucek saw an opportunity to compete with public transportation, car rental companies and taxis.

“First we thought we’d copy SuperShuttle from the US. But then we saw that there were not many people traveling on the same route at the same time. In the end, we couldn’t fill up a van every half an hour. Then we started to think about how low-cost airlines work.

“That’s how then we came up with our probability price management. Based on the prediction of how many people will travel on a certain day, we fix the prices. Usually people book our shuttle together with flight tickets — two to three weeks or even a month in advance. In this case they can get really low prices.

“On the other hand, we learned that on longer distances people can be quite flexible. When you go to the airport, you can choose to get there some time earlier than you need for a lower price. That’s how we came up with the concept of flexibility window.”

What can and can’t be outsourced

Coming up with good ideas, however, obviously wasn’t enough to get a company running as none of the founders had anything to do with software development. Following the best practices of bootstrapping, Gucek decided to outsource the technical part to Indian programmers, but the process took two years.

“It was crazy with all the Skype meetings, and at the end I had to actually go to India to make it happen, it was horrible,” he recalls. “But at the end I got the whole platform for $10,000, which was really cheap.”

After the demand-responsible transportation platform was developed, the founders faced the fact that the difficult part had only just begun for them. Surprisingly, existing transportation companies weren’t that fond of an idea of being disrupted.

“Initially we just wanted to build a marketplace, but there was no transportation company that wanted to work with us, because they thought we’d bankrupt soon,” Gucek said. “Also there was a question of who takes the risks: we guarantee the transportation, which means that if there’s only one person in the vehicle, we’ll make a loss. This is a big difference between us and Uber: with UberPool, if you’re five people in a taxi, you split the price; but if you’re alone in the car, you pay the full price. On longer distances it doesn’t work, nobody will risk to pay the full price.”

After looking at the responses from potential partners among van and bus operators, it was obvious for GoOpti that they had to buy vehicles to get off the ground. Since then, the startup has purchased 21 vehicles of different sizes; currently there are also GoOpti franchisees with about 40 vehicles, while 30 more of them are owned by transportation companies, which became much more cooperative after seeing the startup didn’t go broke.

Since 2011, GoOpti has grown to 150,000 passengers and about €3,2 million in revenues in 2014, shuttling people mostly from Slovenia and Croatia to airports in Italy, Germany, Austria, Hungary and Slovakia. The company hasn’t had to attract funding so far as its clients book and pay for rides 27 days in advance on average, creating positive cash flow from day one.

The service offers three types of tickets. The cheapest one is Opti, which accounts for about 70 percent of bookings. Opti passengers are content with waiting for a van for up to three hours at home and arrive to the airport up to three hours earlier than it would be perfect for them. They could, however, pay some €10 ($11) to narrow down the flexibility window.

The second option is Fixed, which is used by some 20 percent of the company’s passengers. Here the customer gets picked up exactly where and when she wants and agrees that there could be other people sharing the ride.

The most expensive option is VIP, which is similar to taxi and accounts to about 10 percent of clients. Gucek claims it usually is cheaper than normal taxi because the company is able to get passengers for the ride back.

Comparing prices between GoOpti, carpooling services like BlaBlaCar and conventional public transportation, Gucek made an example of buses between Ljubljana and Venice airport.

Interestingly, despite the service being initially thought of as one for business customers, at the moment about 70 percent of GoOpti’s passengers are leisure travelers.

From countryside to city centers

After three years of bootstrapping, GoOpti is turning to investors to fuel its European expansion, looking for a €2.5 million funding round.

“Only in the EU, there are more than 400 cities of the right size that don’t have a big airport in the immediate vicinity,” Gucek said.

The startup founders see more promise in Eastern European countries where there are issues with public transportation, however there’s interest for it even in the Western ones like Germany or Italy.

Another big ambition of the startup is to improve the technical platform to the point where it will allow to book shorter travels less time in advance: at the moment the closest date one can make a booking is the day after tomorrow.

Since the company’s launch in 2011, Indian outsourcing developers have been substituted by a local team of programmers, which recently joined the company. The ultimate goal Gucek talks about is to make GoOpti compete with Uber within cities by offering cheap shared rides in real time.

Gucek admits that reaching this goal will take a while — not only for GoOpti, but for Uber as well, — but eventually we’ll see such platforms as evidence of complete disruption of the way we travel.

Read next: What the best writers know