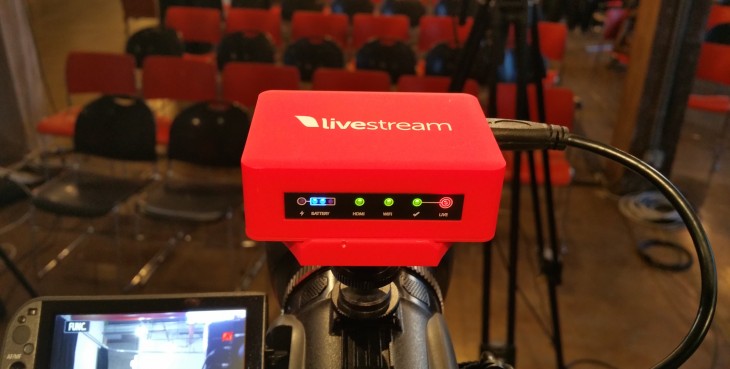 Livestream today announced a new video encoder to its hardware product line, the Broadcaster mini. The device works with any camera that has an HDMI port, and connects via Wi-Fi to send live 1080p videos to your Livestream account.

The Broadcaster mini is designed as a sequel to the original Broadcaster video encoder launched three years ago. The mini version measures in at about 2.8 by 2 inches – roughly 1/3 the size of its predecessor. It also bumps streaming speed from 2.3 Mbps to 4 Mbps, and runs on an internal rechargeable Li-ion battery instead of AA batteries. The company estimates battery life to last about two to three hours, and is rechargeable via micro USB.

You can also pair the device through Bluetooth and use the Livestream app to select the channel to air live (if you have multiple channels under the same account) or chat with current viewers. If you don’t want to use your phone, a “Go Live” button the side of the device lets you manually push the feed online.

“We see an opportunity for anyone to make live events accessible for those who can’t physically attend a event,” Livestream tells us. “Be it weddings, presentations, sporting events or marathons, we want to enable people to affordably share their experience with everyone.”

Alongside the announcement of Broadcaster mini, Livestream says it will replace the original Broadcaster with Broadcaster Pro, an updated version that also feature an internal battery and a smaller body, in addition to an ethernet port, built-in LED menu screen, audio input jack and USB port for wireless network adapters.

Livestream says by offering two pricing options, it hopes to encourage more people to explore livestreaming their own events and cater to those who might not need all the bells and whistles from a Pro version.

The Broadcaster mini will ship today for $295; the Broadcaster Pro will go for $495 and is set to arrive in April. The Livestream app is available for free on both Android and iOS.

Read next: BlackBerry is betting big on its upcoming cross-platform business apps