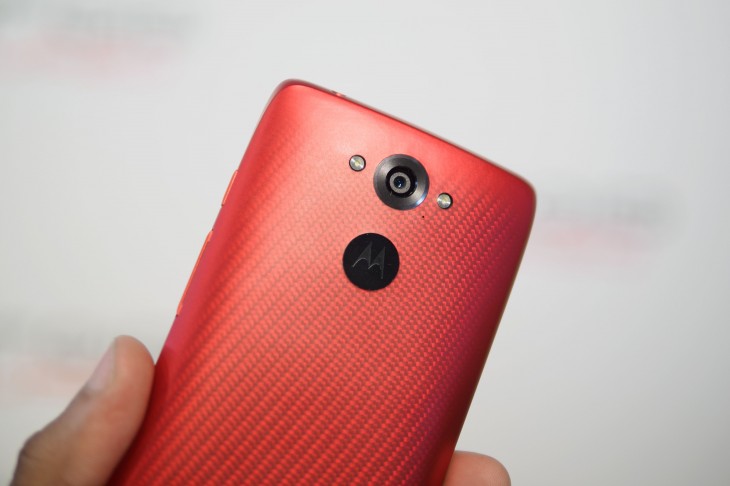 Earlier today, Verizon and Motorola introduced their newest addition to the Droid line-up: the Droid Turbo. We were able to get some time with the device to give you our first impressions.

The Droid Turbo comes in three designs: a red or black ‘metalized glass fiber’, or a black ‘ballistic nylon’. They’re rather aggressive-looking, in typical Droid fashion, but looked better in person than the pre-release press shots.

I was able to try out all three devices and was personally partial to the nylon back. The glass fiber options had a pleasant soft-touch feel to them – and the red option is very red – but ultimately didn’t look so different to a textured plastic back.

The ballistic nylon, on the other hand, at least stands out a bit more from the crowd.  Motorola claims both materials are scratch-resistant and highly durable.

The best part of the nylon design though? No obnoxious Verizon logo. Granted, ‘Droid’ is basically a Verizon logo at this point, but at least it’s small and unobtrusive.

The phone comes with a humongous 3,900 mAh battery with quick charging, and you could supposedly get eight hours of mixed use with 15 minutes on the included charger. A representative claimed you can listen to the first six Harry Potter audiobooks before the battery will die on you.

With such a humongous battery, you might expect the phone to be thick and heavy, but the phone feels surprisingly comfortable. This is aided in part by the relatively small bezels around the display – the Turbo manages to have a frame approximately the same size as my HTC One M8 while fitting a larger, 5.2 inch display. It’s a little bit thicker, but you probably wouldn’t care.

Speaking of the display, it looks great in its QuadHD resolution. I’m generally not a fan of AMOLED displays for their typically exaggerated color saturation – and indeed, colors were still too strong here – but it’s an important part of making Moto Display work without consuming much battery life. There were some off colors when tilted to an angle, however.

The phone isn’t completely waterproof like some recent devices, but Motorola did show off the hydrophobic coating on the internals. In the photo above, the chipset to the left isn’t coated, and lets water get on it easily. For the one on the right, on the other hand, the water slipped away like teflon.

Mercifully, the Droid Turbo is running a build very close to that of the Moto X. It’s basically stock Android, with a few custom apps and features. There are a couple of pre-loaded Verizon apps, but overall they don’t seem to get in the way.

Included are all the features from the 2014 Moto X, including Moto Display and Moto Assist. You can even still wave your hand over the display to check for new notifications.

The camera seemed to be a strong point, a departure from the historically weak cameras on Motorola phones. It’s a high resolution 21MP and runs the company’s custom camera app, which lets you take photos just by tapping the screen.

Exposure and colors were accurate, and the images seemed reasonably sharp. It also shoots 4K video to take advantage of the display, as well as 720p slow-mo.

Finally, given the horsepower of its internals and near-stock software, it’s no surprise that it ran smoothly, but we’ll put it through its paces during out review.

Motorola and Verizon seem to have a winner on their hands – it’s basically the new Moto X with an improved camera and a much bigger battery, though I still think the Moto X has the better design.

We’ll have to spend some more time with it before we can give any final thoughts, but it seems like Verizon users have a strong exclusive to consider soon.

Read next: A guide to end awkward handshakes