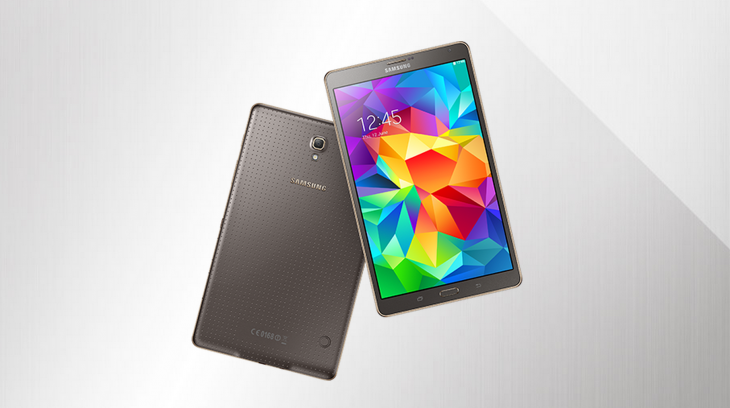 The Galaxy Tab S also boasts adaptive display technology to optimize gamma, brightness, contrast and sharpness based on the content you’re viewing and where you’re using the tablet. Samsung says the Super AMOLED display is 40 percent less reflective than LCD screens to help with outdoor use.

The lightweight devices measure in at 6.6 mm thick, and run Android 4.4 (KitKat) under Samsung’s Magazine UX. Both tablets will also come equipped with the company’s Knox security platform, support voice calls and offer up to 11 hours of battery life.

Samsung has also added a built-in fingerprint scanner, allowing different users to access their profiles just by pressing the home button to log in. This is particularly useful for families, as the little ones will be able to automatically sign on to the device in Kids Mode and access appropriate content.

The Galaxy Tab S will launch with several content consumption apps such as Papergarden, an interactive magazine viewer (in partnership with Condé Nast), Kick, a dedicated app for soccer news in honor today’s FIFA World Cup kickoff, Milk Music and Kindle for Samsung.

For more details, check out our hands-on review here.