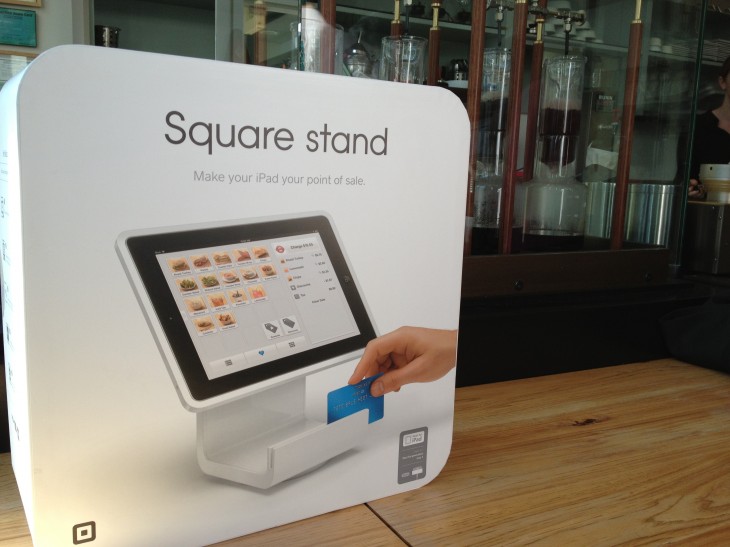 Square announced today the launch of a new product it’s calling Square Stand, a new way to process point of sales transaction right from the iPad.

At a press conference held across the street from Square’s headquarters in San Francisco, CEO and co-founder Jack Dorsey shared the company’s new hardware designed to help local businesses with a brick and mortar location. The company claims that the new iPad tool will give merchants a “remarkable new way to manage and grow their business, all for the price of a cash register.”

iPad payments account for nearly 50 percent of total payments processed by Square so bringing this to brick and mortar stores to take on the physical cash register could make things more simplistic for merchants.

Square Stand works with Square’s main product, the Reader, a mobile credit card payment hardware device. It also offers real-time analytics, reporting, and what it states is a unique customer experience. The stand rotates and helps make social the active commerce and can either be a mobile device or be bolted down to the table or counter. The device has a card reader where the card data is encrypted at the point of swipe.

Dorsey says “Local business owners take as a given that they need an ugly, slow, expensive, and complicated point of sale system cluttering their counter. Square Stand is elegant, fast, affordable, and easy to use. Whether you’re selling cupcakes, cardigans, or cappuccinos, running your business with Square has never been easier.”

This is Square’s first hardware that it can call it’s own. It previously had a business in a box solution, but that relied on the hardware from other company’s.

Shipping of the Square Stand begins on July 8 and anyone can preorder it off of the company’s website. It will be also available in local retailers like Best Buy.

Starting tomorrow, 13 merchants in 30 locations around the US will be using Square Stand, including salons, coffee shops, and others in places like San Francisco, Phoenix, Baltimore, New York City, Los Angeles, Houston, Denver, and Seattle.

Square also announced that it is is now processing $15 billion payments annually. That number doesn’t include payments from Starbucks, which is a major investor in Dorsey’s company and using its Square technology as part of its full point of sale system.

Earlier this week, Dorsey sent out a somewhat cryptic Tweet:

Hello, San Francisco. It’s going to be a big week.

This is the latest announcement since the company began a series of major hires, starting with former Google executive Francoise Brougher to be its Business Lead. A couple of weeks later, it picked up PayPal Vice President Alex Petrov to handle its merchant outreach and partnerships. And just last week, it hired former Deputy US Trade Representative Demetrios Marantis to oversee the company’s international affairs efforts.

Read next: Bluelounge updates its super-handy MiniDock iPhone charger with a Lightning connector