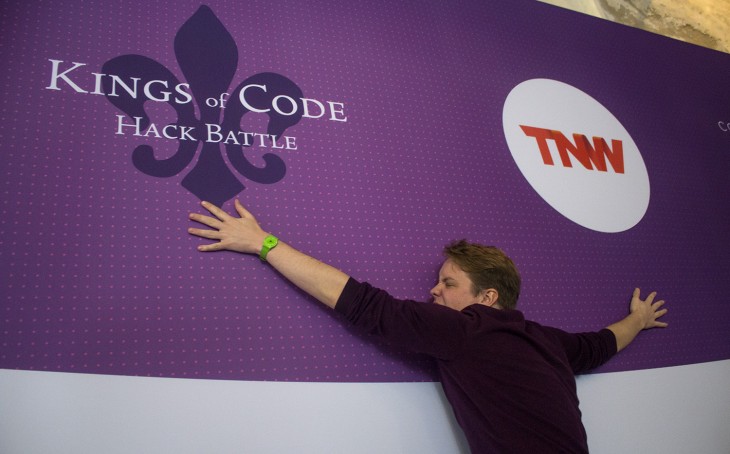 We’re here in Amsterdam for TNW Europe 2013, and what’s a better way to kick things off than with a massive hackathon? The main conference begins tomorrow, but the Hack Battle is already in full force.

We’ve invited 100+ developers together for 36 hours of non-stop coding, heaps of free food and countless forms of caffeine. Right now, there’s just a few hours left until the final presentations, so we’re diving in to see what ideas are percolating. Here’s some of our favorite hacks so far (keep in mind, these aren’t startup ideas, but hacks):

First up is back-end developer Chloé Laisné, iOS developer Aymeric Gallissot, and front-end developer Loic Saint-Roch with what they call a “location-based collaborative playlist.” Tapping into Spotify and Deezer APIs, the team is building a way for stores to start a playlist that any visitor can contribute to using their app.

UX designer Audrey Richard-Laurent, front-end developer Marcin Wosinek and back-end developer Boudewijn Overvliet are creating an app which makes donating to causes more social. Using Braintree and LinkedIn APIs, the app will visualize donations as they are made. Participants who donate appear on this visualization, and when they get their friends/connections to donate, they’ll get points, creating a playful competition.

Yes, you read that name right. Think of BumpNasty as a follow up to apps like Tinder. According to creators Justin Halsall (back-end), Padraig Mckee (designer) and Tim Flapper (iOS): Say you meet someone you like, you’re into each other and want a place to go. This app lets you connect, find the nearest hotel, book it and get directions to go there. It also lets you automatically split the bill (because we’re living in a modern society).

Coming from a more serious angle is Push2Show, an Android app that helps you make quick decisions. For example, if you’re a designer and want instant feedback from fellow designers, you can push a question to your group of designer friends. Creators Michael Bevz (Android), Anton Liulichev (Java), Matthijs Schippers (Design) and Andreas Willemse (concept) say you could also use it for non-work related questions, like if you’re searching for feedback on an outfit when you’re in the dressing room (like Fashism).

These are just a handful of the most interesting hacks we could find. The real judging begins tomorrow, and we will, of course, share the winning hacks with you after they hit the stage.

Read next: Tomorrow on TNW: Your chance to ask HopeMob's founder Shaun King your entrepreneurship questions