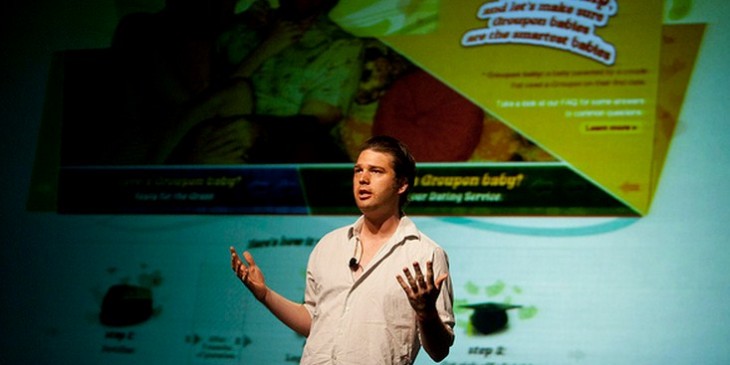 Today it was announced that Groupon will move to replace Andrew Mason as its CEO. The decision comes the day following the reporting of its painful fourth quarter financial performance, that included a surprise loss, and lukewarm revenues.

There had been motions to rid Mason of his position for some time. In early December of 2012, when the company decided against the action, its stock took a double digit whacking in the market.

However, an investment from a hedge fund and other stories trending in its direction lead to Groupon more than doubling its stock price. Until yesterday, when a shockingly ugly quarterly report sent the company down more than 20%. In after hours trading, Groupon is up more than 7%, presumably on this specific news.

According to the official release executives Lefkosky and leonsis will step in to cover his role on an “interim basis.” A search for a new CEO is underway.

For the wary investor, Groupon did state that the company’s previously stated financial expectations for 2013 are the same as previously indicated.

Andrew Mason released a witty statement on the transition, which we have included below.

(This is for Groupon employees, but I’m posting it publicly since it will leak anyway)

After four and a half intense and wonderful years as CEO of Groupon, I’ve decided that I’d like to spend more time with my family. Just kidding – I was fired today. If you’re wondering why… you haven’t been paying attention. From controversial metrics in our S1 to our material weakness to two quarters of missing our own expectations and a stock price that’s hovering around one quarter of our listing price, the events of the last year and a half speak for themselves. As CEO, I am accountable.

You are doing amazing things at Groupon, and you deserve the outside world to give you a second chance. I’m getting in the way of that. A fresh CEO earns you that chance. The board is aligned behind the strategy we’ve shared over the last few months, and I’ve never seen you working together more effectively as a global company – it’s time to give Groupon a relief valve from the public noise.

For those who are concerned about me, please don’t be – I love Groupon, and I’m terribly proud of what we’ve created. I’m OK with having failed at this part of the journey. If Groupon was Battletoads, it would be like I made it all the way to the Terra Tubes without dying on my first ever play through. I am so lucky to have had the opportunity to take the company this far with all of you. I’ll now take some time to decompress (FYI I’m looking for a good fat camp to lose my Groupon 40, if anyone has a suggestion), and then maybe I’ll figure out how to channel this experience into something productive.

If there’s one piece of wisdom that this simple pilgrim would like to impart upon you: have the courage to start with the customer. My biggest regrets are the moments that I let a lack of data override my intuition on what’s best for our customers. This leadership change gives you some breathing room to break bad habits and deliver sustainable customer happiness – don’t waste the opportunity!

I will miss you terribly.

For reference, here is the 9th level of Battletoads for NES. It was one of the worst levels in one of the hardest games for the platform. Throughout the level, you’re continuously chased by giant circular sawblades which chomp at your heels with every step. Which says a lot about Mason’s state of being for the last several months.

Update: The Wall Street Journal secured a copy of Groupon’s own internal memo concerning the firing of Mason. We have pasted it below:

After more than five years of super-human service to Groupon, Andrew has been asked to step down.

Andrew’s achievements during his tenure are virtually unmatched in Internet history.  Not only did he help invent the daily deals space, but he also created one of the fastest growing companies in history.  But for all of us on the Board, maybe his greatest achievement is that in the face of extreme pressure and public scrutiny, he guided the company with grace and never lost sight of the things that matter most: our customers and merchants.

It’s hard to believe that Groupon is only four years old.  Our journey began in November of 2008 when we offered our first deal (pizza at 50% off) to a handful of people in Chicago.  Today, with over 11,000 employees, we now offer more than 30,000 deals a day to over 200 million subscribers globally.  But even more staggering is the fact that our customers purchased more than 50 million Groupons last quarter alone.

Groupon is a very different company today than it was just a few short years ago.  From our local daily deal roots, we have spent significant time and resources evolving into new categories including Goods, Getaways, and Live.   We have also fundamentally changed the way customers interact with Groupon.  We have migrated nearly 40% of users in North America to mobile, while dramatically reducing our reliance on email which now accounts for less than 50% of our transactions.  And with Pull, consumers can browse among thousands of deals on our site and buy exactly what they want, when they want it.

Yet we all know our operational and financial performance has eroded the confidence of many of our supporters, both inside and outside of the company.   Now our task at hand is to win back their support.

We also need to stay relentlessly focused on doing what is right for our customers and merchants.  We’ve built a curated marketplace that is vibrant and thriving; and if we continue to invest in our future, stay focused on the long term and lead through innovation, we can achieve truly great things together.

As Groupon starts to write its next chapter, Ted and I are both honored to be able to help guide the company until a new CEO is in place.  We are fortunate to have a very talented and committed management team to help us execute on our vision.

We appreciate the tireless effort you have poured into getting our company where it is today, and we are even more excited about the future that lies ahead.